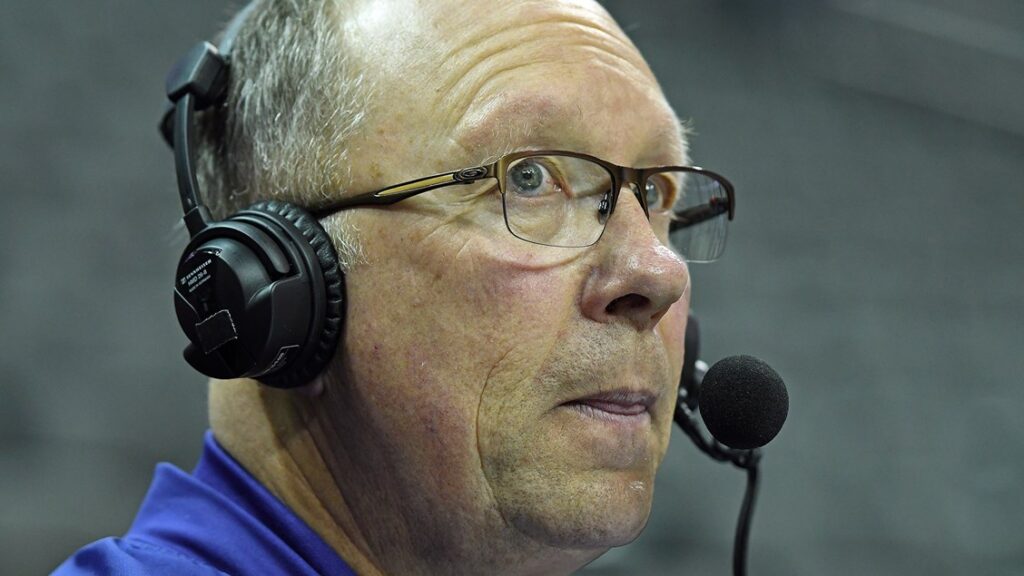 MANHATTAN, Kan. (Kansas State Athletics)  – Wyatt Thompson, who is entering his 21st season as the Voice of the Wildcats, will be inducted into the Kansas Association of Broadcasters Hall of Fame as he is one of three inductees to be enshrined in the Class of 2022.

The ceremony will take place October 24 at the Hilton Garden Inn in Manhattan, and Thompson will be joined in the class by radio engineer Don Free, who was a longtime member of both the Kansas City Royals and K-State Sports Network radio networks.

In addition to his play-by-play duties for Wildcat football and men’s basketball, Thompson can be seen regularly each summer at each Catbacker event across the state in addition to hosting various radio programs, events and programs at K-State and in the Manhattan community.

He started his broadcasting career in 1976 as a sportscaster for various high schools, colleges and universities in Kansas, spending time at stations in Great Bend and Abilene.

Thompson worked for KAYS radio and television in Hays from 1985 until 1989 where he was the play-by-play voice at Fort Hays State. While in Kansas, he was recognized with the Kansas Association of Broadcasters (KAB) Play-by-Play Award in 1982 and the Oscar Stauffer Sportscaster of the Year Award in 1989.

Thompson, also the 2011 recipient of the Hod Humiston Award from the KAB, came to Kansas State in 2002 from Colorado State, where he was the play-by-play voice for CSU’s football and men’s basketball teams for five years.

An accomplished professional, Thompson won the Colorado Broadcasting Association award for best play-by-play in 2000. In addition to his duties at CSU, Thompson was also a sports reporter for Clear Channel Denver, the Countdown to Kickoff host for the Denver Broncos on KOA Radio and hosted the Zone Sports Insiders show on 760 The Zone in Denver.

Cross Country to Kick off 2022 Season on September 3