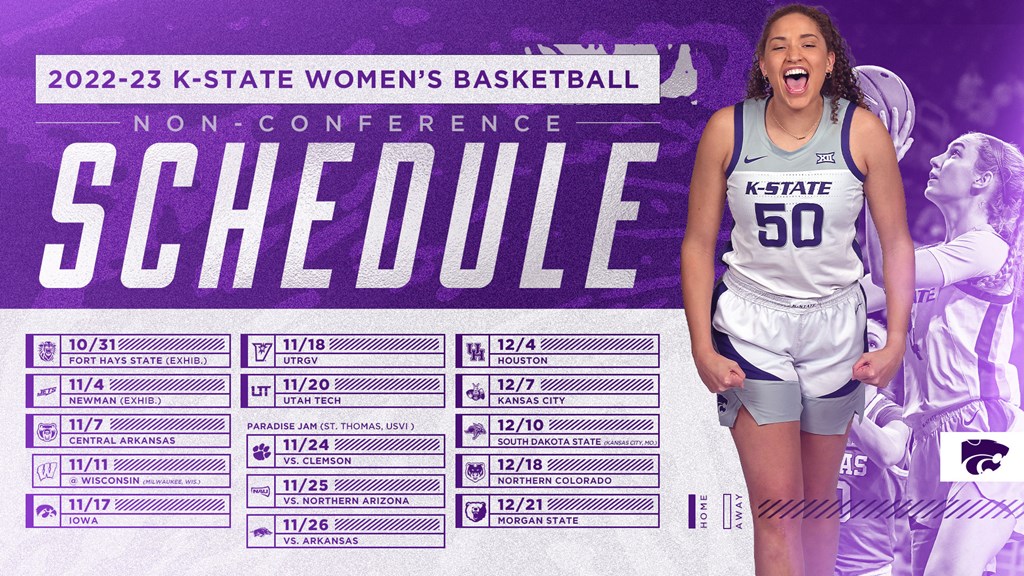 Central Arkansas finished the 2021-22 season with an overall record of 9-19 and a 4-12 mark in their first season as a member of the ASun Conference. K-State leads the series with Central Arkansas, 4-0.

The Wildcats will play the first game away from Bramlage on Friday, November 11, as K-State faces Wisconsin at the home of the Milwaukee Brewers, American Family Field, in the Brew City Battle.

This will be the first time in the 55-year history of K-State women’s basketball in which K-State will play a game in a Major League Baseball stadium. The Wildcats will play its second neutral site game in the state of Wisconsin in the Mittie era, as K-State faced Arizona State in La Crosse, Wisconsin, on December 16, 2018.

This will be the second meeting in the series between the schools, as the Badgers captured the inaugural game on Nov. 24, 2006, in Las Vegas, during the UNLV Lady Rebel Shootout.

Originally announced in mid-May, the Wildcats will face its second straight Big Ten foe as they host 2022 All-American Caitlin Clark and the Iowa Hawkeyes on Thursday, November 17, at 8 p.m.

K-State leads the all-time series against the Hawkeyes, 4-1, including a 3-0 mark in games played in Manhattan. This marks the first regular season visit from a Big Ten opponent to the Little Apple since the Hawkeyes faced the Wildcats on December 3, 2011.

Following its meeting with the Hawkeyes, K-State returns to Bramlage the next day to host UTRGV on Friday, November 18. This is the second straight season K-State will play a home game on consecutive days, as the Wildcats played on two straight dates during the 2021 Preseason WNIT. The Wildcats hold the advantage in the series, 4-0, including a 79-66 win on December 28, 2019.

UTRGV finished the 2021-22 season with an overall mark of 14-19 and an 8-10 record in the WAC. The Vaqueros are led on the sideline by former Pittsburg State head coach Lane Lord, who is in his fifth season in Edinburg, Texas.

K-State completes its furious weekend three-game home stand by welcoming in Utah Tech on Sunday, November 20. This will be the first meeting between the programs.

During the Thanksgiving holiday, the Wildcats will play in the 23rd edition of the 2022 U.S Virgin Islands Paradise Jam at the University of the Virgin Islands Sports and Fitness Center located in St. Thomas. The games will take place from November 24-26, 2022, with the games streamed on ESPN3.

Northern Arizona tallied a 17-14 overall record and a 12-8 record in Big Sky play. The Lumberjacks reached the title game of the 2022 Big Sky Conference tournament. K-State leads the series with Northern Arizona, 2-0, and will face the Lumberjacks for the first time since December 20, 2001.

Arkansas reached the 2022 NCAA Tournament with an 18-14 overall record and a 7-9 record in SEC play. The series between the Wildcats and Razorbacks is tied at 3 apiece. This will be the first neutral site matchup in the series, as the previous six were played on one of the two campuses.

The Wildcats will begin the month of December with a visit from future Big 12 member, Houston, on Sunday, December 4. This will be the second-ever meeting between the programs, as the teams last squared off on Nov. 24, 1977, in Plainview, Texas, a 77-64 K-State win.

K-State will tangle with Kansas City on Wednesday, December 7. The Wildcats lead the overall series with Kansas City, 11-3, including a current eight-game winning streak.

Kansas City will be led by first-year head coach Dionnah Jackson-Durrett, who took the reins of the program in March after serving as the associate head coach at Texas. The Roos completed the 2021-22 season with a 23-9 overall record and a 12-6 record in Summit League action, resulting in a bid into the 2022 Postseason WNIT.

For the second time in four seasons, K-State will play a regular season game in Municipal Auditorium in Kansas City, Missouri, as the Wildcats host South Dakota State on Saturday, December 10. K-State owns a 7-0 record in the series with the Jackrabbits, including a 79-73 win in Brookings, South Dakota, on December 11, 2021.

South Dakota State ended the 2021-22 season with a 29-9 overall record and a 17-1 mark in Summit League play. The Jackrabbits represented the Summit League in the 2022 Postseason WNIT and captured the title with an 82-50 drubbing of Seton Hall in the championship game in Brookings.

K-State will close out its 2022-23 non-conference regular season schedule with a pair of first time opponents. The Wildcats will face Northern Colorado on Sunday, December 18, and then host Morgan State on Wednesday, December 21.

Northern Colorado registered a 15-16 overall mark and a 9-11 record in Big Sky play.

Morgan State capped its 2021-22 season with an 18-8 record and an 11-3 mark in Mid-Eastern Athletic Conference action.

In preparation for the 2022-23 non-conference schedule, K-State will host a pair of exhibition games. The Wildcats will face Fort Hays State on Monday, October 31. K-State will then host Newman on Friday, November 4. Among the coaching staff at Newman is Wildcat legend, Nicole Ohlde-Johnson. This will be Ohlde-Johnson’s first visit to Bramlage as an assistant coach.

For the 2022-23 season, Kansas State returns seven letter winners including all five starters from last season. The Wildcats will be led by All-American center Ayoka Lee and the sophomore trio of Brylee Glenn, Jaelyn Glenn and Serena Sundell.

The 2022-23 Big 12 schedule, game times, promotional and television schedules will be released later this summer.

The 2023 Phillips 66 Big 12 Women’s Basketball Championship will be contested at the Municipal Auditorium in Kansas City, Missouri, March 9-12, 2023. Ticket information will be available later this year.