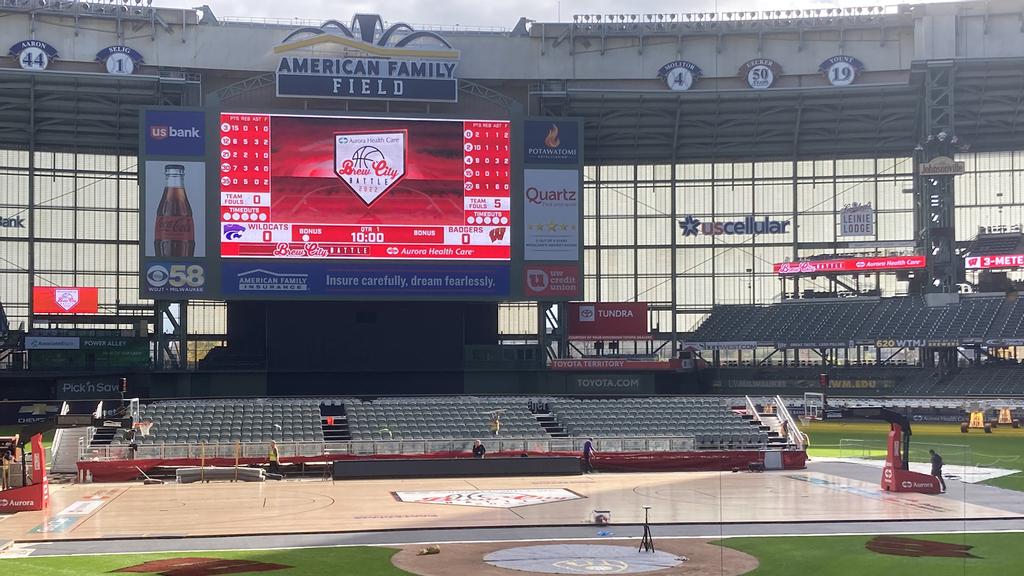 Series History vs. Wisconsin
• Wisconsin leads the series, 1-0.
• The previous meeting between the two schools came on Nov. 24, 2006, in Las Vegas, a 56-53 Badger win.
• This will be head coach Jeff Mittie‘s first meeting with Wisconsin.
• The Wildcats are 72-60 against current members of the Big Ten Conference. K-State’s last game against a member of the Big Ten Conference occurred on Nov. 30, 2019, in the Junkanoo Jam against Michigan State, a 65-60 Spartan win.

MANHATTAN, Kansas (Kansas State Athletics) – K-State (1-0) will play one of its most unique games in its history, as the Wildcats face Wisconsin (1-0) in the Aurora Health Care Brew City Battle on Friday afternoon at 3:30 p.m., in Milwaukee, Wisconsin, at the home of the Milwaukee Brewers – American Family Field.

• Friday’s game can be seen live on Big Ten Network, as Sloane Martin (play-by-play) and Meghan McKeown (analyst) will have the call.

Starting 5
Five names, numbers or storylines about K-State women’s basketball
1. First Attempt at 1K for K-State
• Following its win over Central Arkansas in the season-opener, K-State will have its first chance at program history on Friday, as the Wildcats sit at 999 program wins. With a win, K-State would become the third Big 12 program and 19th NCAA Division I school to reach 1,000 program victories.
2. K-State in the Dairy State
• The Wildcats own an all-time record in games played within the state of Wisconsin of 2-4. The Wildcats will play its second neutral site game in the state during the Jeff Mittie era, as K-State faced Arizona State in La Crosse on December 16, 2018.
3. Wildcat Letterwinners from Wisconsin
• In its history, K-State has had three letterwinners from the state of Wisconsin – Kayla Goth (DeForest, 2015-19), Taylor Lauterbach (Appleton, 2020-present) and Breanna Lewis (Milwaukee, 2013-17). Goth and Lewis each collected numerous All-Big 12 honors during their times at K-State.
4. Mittie Collects 600th Career Win
• K-State head coach Jeff Mittie reached the 600-win mark in his 31 seasons as a head coach (600-345, .635) doing so with an 83-43 win over Central Arkansas on Nov. 7, 2022.
5. G-Squared
• Senior Gabby Gregory made her K-State debut memorable with 19 points and seven rebounds. Her 19 points were the most in a K-State debut since Kaylee Page tallied 21 points at Tulsa on Nov. 13, 2015.

• K-State enters Friday’s game with 999 program victories and ranks 19th among NCAA Division I programs and third among Big 12 schools for all-time wins.
• With a win, K-State will become the 19th NCAA Division I member of the 1,000 win club.
• When K-State reaches the 1,000-win mark, it will be one of three schools in the nation that would have 1,000 wins and its current head coach with 600 or more career wins (Stanford and Connecticut).
• In its 55-season history, K-State is averaging 18.5 wins per season.

At a Glance: Wisconsin
• Wisconsin began its 49th season of women’s basketball with a 58-49 win at Milwaukee on Monday night.
• On the sideline, Wisconsin is led by second-year head coach Marisa Moseley. The 2004 graduate of Boston University owns a career record of 54-50 (.519) and is 9-21 (.300) during her time in Madison.
• The Badgers were led against Milwaukee by redshirt freshman guard Maty Wilke with 12 points, six rebounds and five steals. Wisconsin’s roster features seven true freshmen and two redshirt freshmen with three seeing action in the season-opener.
• Wisconsin’s top returner this season is senior Julie Pospislova, as she averaged 14.1 points and 4.0 rebounds in the 2021-22 season.
• Adding to the attack against the Panthers was newcomer and 2021-22 Patriot League Player of the Year Avery LaBarbera. The 5’6″ guard from Harrison, N.Y., pulled down a team-high 10 rebounds and added nine points, three steals and two assists.

Wildcats’ Defense Forges Identity
• K-State has continued to be a force on the defensive end during head coach Jeff Mittie‘s nine seasons on the bench.
• The Wildcats limited Central Arkansas in the 2022-23 opener to 43 points on 30.2 percent shooting, including a 21.4 field goal percentage in the second half
• During the last 20 seasons, K-State is 123-3 (.976) when holding an opponent to 49 points or less including a 42-0 mark in the Mittie era.
• In the 2021-22 season, the Wildcats limited opponents to 60.6 points per game and a field goal percentage of .379.
• K-State’s scoring defense last season was the second-lowest in the Mittie era since his first season when the Wildcats held foes to 58.2 points per game. The opponent field goal percentage is the third-lowest during Mittie’s time in Manhattan.
• K-State was third in the Big 12 in scoring defense. The Wildcats were third in the Big 12 in field goal percentage defense.
• In its NCAA first round win over Washington State in 2022, K-State set the school record for fewest points allowed in an NCAA Tournament game with 40 points surrendered.
• K-State held its first four opponents of the 2021-22 season under 49 points in each game. This was the first time in the Mittie era and the first time since the 1972-73 season.
• Against UT Martin on Nov. 12, the Wildcat defense suppressed the Skyhawks with just 30 points allowed. The 30 points allowed were the fewest in the Mittie era and the lowest opponent total against K-State since Nov. 12, 2011, against Dartmouth when K-State surrendered just 20 points.
• The Wildcats held 13 opponents to a field goal percentage of 35.0 percent or less including a season-low of 18.3 percent against Northwestern State on Nov. 27.

K-State Holds Foes to Single-Digits
• In the eighth season of the quarter system in women’s college basketball, K-State’s defense has limited its opponents point production for 10 minute durations.
• Kansas State is 70-23 (.753) when holding an opponent to single digits in any quarter in a game.
• K-State opened the 2022-23 season by holding Central Arkansas to nine points in the third quarter and eight in the fourth.
• In the 2021-22 season, K-State held opponents to 24 single-digit quarters including a five-quarter stretch spanning the final three quarters of the Nov. 12 game against UT Martin and the first two quarters of the Nov. 14 game against Western Kentucky.
• Against Oklahoma State on Feb. 20, K-State limited the Cowgirls to six points in the first half including a school record for fewest points in a second quarter with two. K-State held Oklahoma State without a made field goal for the entirety of the second quarter (0-of-12).
• Against UT Martin, K-State held the Skyhawks to three straight single-digit scoring quarters including a school record low for a third quarter of four points.

Sharing is Caring
• Kansas State returned to its unselfish ways to begin the 2022-23 season, as the Wildcats dished out 23 assists and tallied a 1.35 assist-to-turnover ratio in the season-opening win over Central Arkansas.
• Over the last 16 years, the Wildcats are 79-7 (.919) when handing out 20 or more assists.
• K-State was unselfish in the 2021-22 season, dishing out 545 assists (16.5 apg). The Wildcats were 19th in the nation for total assists and 17th in the nation and third in the Big 12 in assists per game. The Wildcats were 20th in the nation and second in the Big 12 in assist-turnover ratio at 1.21.
• K-State’s 545 assists last season were the most for the program in the Jeff Mittie era and the most since the 2005-06 season (553).
• Of its 790 made field goals, K-State recorded an assist on 69.0 percent of those field goals. According to HerHoopStats.com, K-State ranked third in the nation and first among Power 5 conference members for assisted shot rate.
• Since assists became an officially tracked stat in 1981-82, K-State has registered an assisted shot rate of 60.0 percent or higher at the end of a season 22 times in its history.
• Of the 545 assists doled out, K-State had nine of its 10 active players in 2021-22 with 20 or more assists including four: Serena Sundell, Emilee Ebert, Jaelyn Glenn and Cymone Goodrich with 50 or more.
• K-State had eight games with 20 or more assists last season (7-1). Against Oklahoma on Jan. 23, K-State dished out a season-high 28 assists on 33 made field goals. K-State’s 28 assists were the most since Dec. 3, 2019, against UIW when the Wildcats handed out 30.
• Against Iowa State, K-State handed out 27 assists on 31 made field goals which was a season-high for assisted shot rate of 87.1 percent.

K-State to Honor Klein, Tyler Lockett, four others in Ring of Honor Ceremony