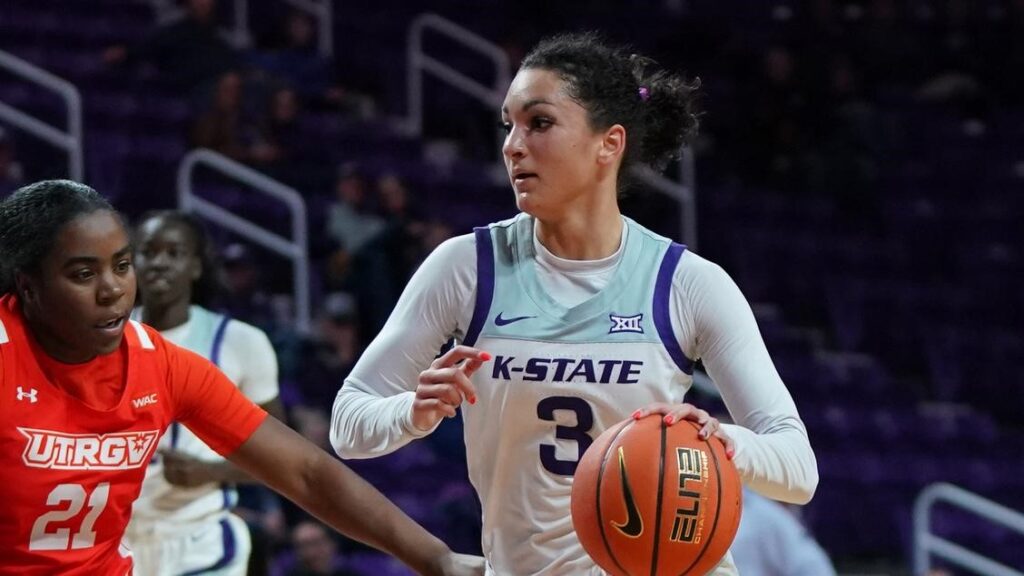 MANHATTAN, Kansas (Kansas State Athletics) – A night after downing the fourth-ranked team in the country, Kansas State returned to Bramlage Coliseum and used a team effort to cruise to a 70-45 win over UTRGV on Friday night.

HOW IT HAPPENED
– K-State (4-0) dashed out to a 19-9 lead at the end of the first quarter, as the Wildcats shot 53.8 percent (7-of-13) from the field.
– In the second quarter, the Wildcats locked down UTRGV (2-2) and held the Vaqueros without a field goal for the entirety of the second frame as K-State built a 34-13 halftime lead.
– The last time K-State held an opponent to 15 or fewer points in a half came against Oklahoma State on Feb. 20, 2022, when the Wildcats limited the Cowgirls to six first half points.
– Over the duration of the first half, K-State held UTRGV to 11.4 percent (4-of-35) from the field and forced 10 turnovers.
– K-State would win the third quarter, 21-14, as the Wildcats used a pair of 3-pointers from Gabby Gregory and one each from Brylee and Jaelyn Glenn to boost its lead to 55-27 at the end of the third stanza.
– The Wildcats ended the night shooting 42.9 percent (27-of-63) from the field and held the Vaqueros to a 20.3 percent (14-of-69) effort. K-State outscored UTRGV in the paint, 34-8 and notched a 37-point performance from its bench.
– K-State was paced by Gregory and Jaelyn Glenn with 13 points each, while Brylee Glenn added 11.

QUICK FACTS
– K-State leads the series with UTRGV, 5-0.
– The Wildcats are 19-3 against current members of the WAC.
– K-State has won 14 consecutive non-conference home games with its last loss coming against Idaho State on Dec. 8, 2020.
– Friday’s starting five was Serena Sundell, Brylee Glenn, Eliza Maupin, Emilee Ebert and Taylor Lauterbach. This was the first time this group started a game together and marked the fourth unqiue starting five in as many games this season.
– Gabby Gregory tallied her 45th career game in double figures and her fourth at K-State.
– Gregory made 3 three-point field goals on Friday, her 31st career game with two or more connections from deep.
– Jaelyn Glenn reached double figures for the third time this season and the ninth time in her career.
– Glenn also made three 3-pointers on Friday, her 12th career game with two or more connections from beyond the arc.
– Sophomore guard Serena Sundell registered a career-high 11 rebounds. This was her first career game with 10 or more rebounds.

FROM THE HEAD COACH
K-State Head Coach Jeff Mittie
On the K-State offense tonight…
“I felt like our shot selection was a problem in the first half. I felt like we settled too much in stretches of the game. We can really share the ball. We’ve got good scorers, but I think we have scorers that score better together. We’re not a ball dominant one player that’s gonna break the defense down. We need the ball to move. We need the ball to move to the right people and we needed to be on time and there were stretches this game where I thought it was really good.”

On starting the game well after last night’s win…
“I’m always nervous. I’m always concerned. I think it’s one of the reasons why we started in the press right away, particularly playing their dribble drive because it’s a you can get in that kind of defense, where you’re playing defense for 25 seconds and it can turn into a real grind it out game, but I felt like we would show up but for the most part this team shows up in practice. I have to get on them occasionally, but they usually correct it pretty quick. So the two things I had problems with were the turnovers. And just I felt like he could have gotten a little better shots in the first half.”

On the turnovers tonight and if there is cause for concern…
“We took care of the basketball fantastic last night. So no, I feel like our team when we’re locked in and focused, we take care of the ball. We value the basketball, and I just think this was a game that was going to challenge us coming off the emotional game last night. And you know, that’s just being honest about knowing the challenge coming into this game, when I don’t know what time they got to bed last night, but I probably got to bed somewhere around 2:30 or 3. And it wasn’t because I didn’t want to go to sleep. I just was wired you know and so they didn’t get a lot of rest last night. They were in the training room getting ready to play today. So I’m proud of them for fighting through both the physical fatigue and the mental fatigue.”

FROM THE FLOOR
K-State Sophomore Guard Jaelyn Glenn
On her third double figure scoring effort this season…
“I feel pretty good about my performance. I just want to do whatever I can to help my teammates be successful. Just gaining confidence in my shot because I did airball the first one. So just still knowing that I’m able to shoot and still shooting when I’m open.”

On the team’s assist and turnover numbers…
“I feel like we had our moments when it was a little bit iffy. But once we figured that out, I think it was really good. It looked really good for us.”

K-State Senior Gabby Gregory
On fitting in with her new teammates…
“I feel like I fit right in. I feel like the style of play that we’re playing really fits me well. And my teammates have been incredible welcoming me as a transfer. I feel great.”

On not letting last night’s emotions seep into tonight’s game…
“I mean, obviously, we take every game super seriously. And I was really proud of my teammates to be able to lock in after such a late night last night and you know emotions are so high like Coach Mittie said. I don’t know if I could go to sleep. So I was up for a long time as well just emotions really high-wired so it was good for us to be able to come in today and get a good win.”

UP NEXT
K-State concludes its three-game home stand on Sunday afternoon against Utah Tech at 1 p.m. For tickets, call (800) 221-CATS or visit kstatesports.com. Sunday’s game will air on Big 12 Now on ESPN+.