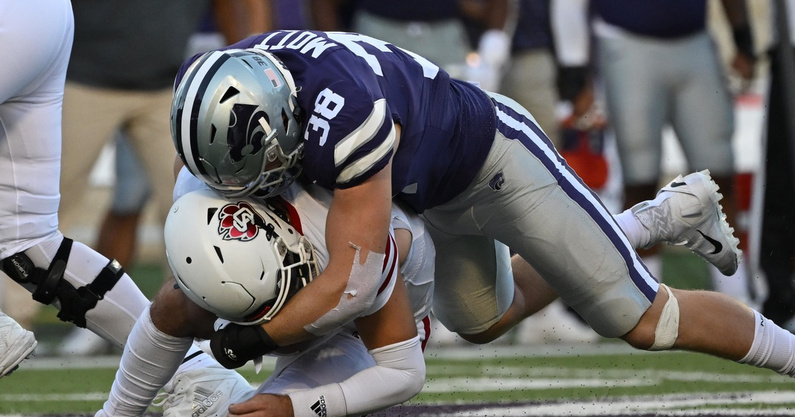 It probably doesn’t come as much of a surprise to most, but the favorite moment of the night for Deuce Vaughn was the first play. He loved being able to prove that he is more than just a rusher or receiver. Vaughn delivered the block at the point of attack on Malik Knowles’ touchdown run.

He did more than just get in the way of the defender, too. Deuce knocked him on his back. Now, he had some karma later in the game when he had his facemask grabbed and pulled, and he shared that it stunned him and had him licking his wounds for a couple of minutes.

But his block was a point of conversation.

Head coach Chris Klieman and his teammates Kade Warner and Cooper Beebe made sure to identify it as a selfless action. His father, who is an NFL scout, also made sure to point it out on Twitter and noted how running backs being just as valuable away from the ball is a huge detail to watch.

While there was some bright spots here and there for the offense, most of the players we spoke to didn’t need guided towards an answer that most would have about the performance. It was that they know they need to fine-tune some details and make some improvements.

Beebe shared that the communication up front needs to increase, though their protections for most of the night seemed to be at a high level. Quarterback Adrian Martinez knows that it wasn’t close to being a perfect night.

Klieman agreed that the passing game never found its footing, though he was very complimentary of how they took care of the ball on Saturday evening. Kade Warner was the only one that raved about what they were able to do on that side of the ball, but he is a coach’s son.

Warner was also the only one to give the coach-speak answer of sorts when asked about Missouri. Every other player shared their excitement and admitted some more juice would be present during the week of practice because the local rival and SEC program would be coming to town.

Beebe, Martinez and Cincere Mason acknowledged that the locker room was already pumped for the week’s contest.

All of the holding calls on South Dakota kind of give it away, but the Kansas State defensive line played an elite game. They lived in the backfield, produced immediate penetration and the havoc rate on that side of the ball was a result of their domination.

And the two safeties had big smiles on their faces after the game when asked about that particular unit on that side of the ball. Savage and Mason were well aware how spoiled they have it because of what their defensive front did and probably will do the rest of the season.

They singled out Nate Matlack, Brendan Mott, Felix Anudike-Uzomah and Eli Huggins for their play in the opener.

CONTINGENT ON THE SOUTH DAKOTA DEFENSE

Aside from just emphasizing protecting the football, there was more reasons why K-State didn’t take as many shots downfield in the passing game. Martinez stressed that he just wanted to let the machine work, and that meant taking what the defense gave him.

He noted how they were sitting back and allowing the underneath throws for most of the night and taking away the vertical routes. Klieman even divulged that they had a number of double moves baked into the plan that just never came free because of how the Coyotes defended in the back end.

While he wasn’t perfect and may have missed a couple chances here and there in the passing game, they were comfortable with what he did and have no concerns moving forward. They felt that South Dakota took a lot away and were content in not pushing it based on the flow of the game.