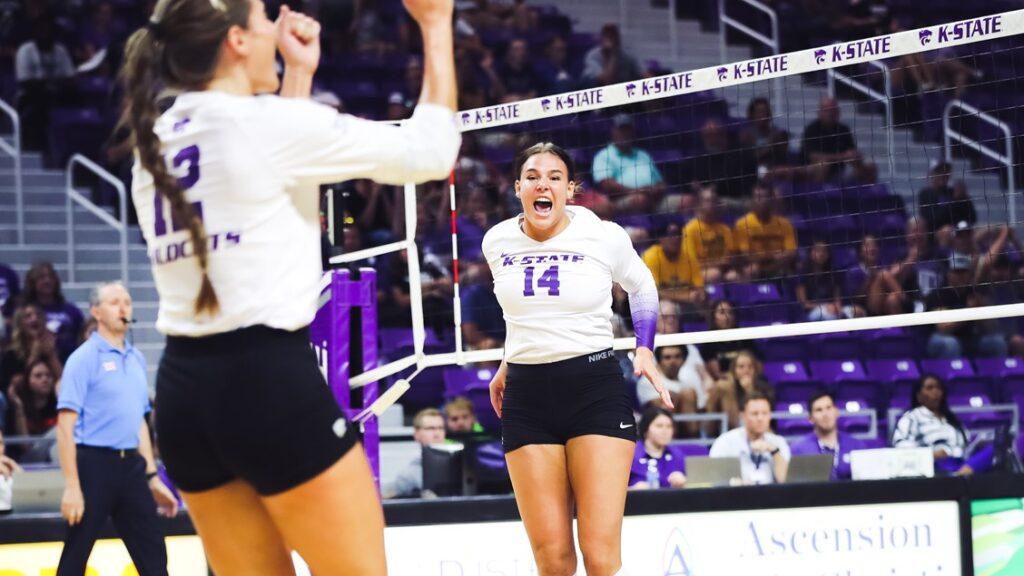 K-State (6-1) finished the match with a wire-to-wire fifth-set victory after Missouri (4-3) rebounded to force a decisive frame down 0-2. Myers came off the bench to lead the Wildcat offense, hitting .419 in producing her career-high kill total.

Baka added 16 kills and a career-high 17 digs for her third double-double of the season. Haley Warner matched Baka’s 16 kills for a season high, while Sydney Bolding added 10 kills and served up a career-high four aces.

As a team, K-State registered 10 aces on the night – its third match with at least 10 service aces. Molly Ramsey pitched in three aces, also a career high.

Hinkle finished with the first double-double of her career, dishing out 41 assists along with 10 digs. Libero Mackenzie Morris registered 15 digs in reaching double figures for the seventh straight match.

Anna Dixon led MU with 17 kills. Jordan Iliff was the only other Tiger to reach double-digits with 10. Kaylee Cox had nine kills and a match-high 21 digs.

K-State has won the last four meetings with Missouri and nine of the last 12 overall.

On responding after Missouri forced a fifth set …
“I thought we got pretty conservative. We made a setter switch, that’s a coaching decision, I like Ava LeGrand, I think she’s showing a lot of potential and improvement and we wanted to give her a chance to show what she can do. But I thought the offense got a little bit conservative. In that moment, we weren’t getting the swings we were early, and I thought we got conservative with our serving, especially down the stretch in game four. We kind of flipped the script a little bit in game five, I thought we came out and serving was the biggest difference. That’s where we were able to separate ourselves and score points from the service line. I thought that’s when we were really rolling.”

On Shaylee Myers’ performance…
“She’s been doing it every day, to be honest. She has earned some opportunities and I am thrilled that we have the outside hitting core that we have right now – with (Aliyah) Carter, with Baka, with Myers –all three give us something just a little bit different. We’ve got four matches in four days (this week) and to be able to use them all and keep them fresh is huge.”

HOW IT HAPPENED
Set One – K-State 27, Missouri 25
K-State owned a 21-12 edge in kills in the opening set, but still trailed by as many as six in the latter stages at 18-12. A five-point run that included two kills by Warner and another by Myers, inched the Cats within a point.

Facing two set-point opportunities by the Tigers, kills by Baka and Myers evened the set at 24. After the teams traded points, back-to-back kills by Bolding and Myers completed a 5-1 closing run and handed K-State the opening set, 27-25.

Myers came off the bench midway through the set and put down five kills on six swings while Baka produced a team-high six kills.

Missouri picked up six blocks in the frame, with five coming in the Tigers’ first 12 points. K-State was forced into 10 attacking errors while MU had just four.

Bolding and Warner teamed up for two blocks and Hinkle dished out 14 assists.

Set Two – K-State 25, Missouri 14
K-State never trailed in building its two-set lead, as Myers picked up six more kills in the set on just 12 swings. Myers needed just nine attempts in picking up her first eight kills on the night.

Five unanswered points behind the service of Bolding broke a 2-2 tie and a 6-1 scoring run opened a 16-9 lead.

Set Three – Missouri 26, K-State 24
Looking to close out a sweep, K-State’s lead grew to as large as seven at 19-12 after a kill from Myers. The Tigers responded with the next three and nine of the next 12 points overall to claw within a point at 22-21.

Missouri, despite being outkilled 15-12, earned its first set win after an 8-2 closing run that was capped by back-to-back kills from Trista Strasser and Iliff.

Mizzou reached the .300 mark for the only time in the match, committing just three attacking errors. Dixon led the way with four kills on eight swings and Iliff contributed three kills.

Baka and Myers both finished with four kills to lead K-State. The Cats racked up five aces in the fourth, two each from Bolding and Ramsey.

Set Four – Missouri 25, K-State 20
The fourth set featured six ties and four lead changes, with the last tie coming at 11-11 as the Tigers scored six of seven to create a 16-12 lead.

K-State got as close as three points following Warner’s fifth kill of the set at 23-20. Mizzou forced the final frame after outkilling the Cats for the only time in the match, 14-13.

Dixon led all players with six kills in the fourth while Warner added five. MU hit .238 to K-State’s .154.

Set Five – K-State 15, Missouri 10
The Wildcats quickly raced out to 7-1 and the lead swelled to eight after a kill from Myers, 11-3, forcing Missouri to use both of its timeouts.

Myers’ fifth kill of the set and 23rd kill of the night sealed the wire-to-wire set victory and handed K-State its fourth straight victory over its former conference rival.

UP NEXT
K-State begins a six-match road swing at the Rambler Challenge, hosted by Loyola Chicago. The Wildcats will take on Rutgers (10 a.m.) and Loyola Chicago (7:30 p.m.) in a Friday doubleheader before finishing the weekend with St. Thomas on Saturday at noon. Rob Voelker will be on the call for all three matches in Chicago at K-StateSports.com/watch and the K-State Sports app. Friday night’s contest against the Ramblers can be seen on ESPN+.