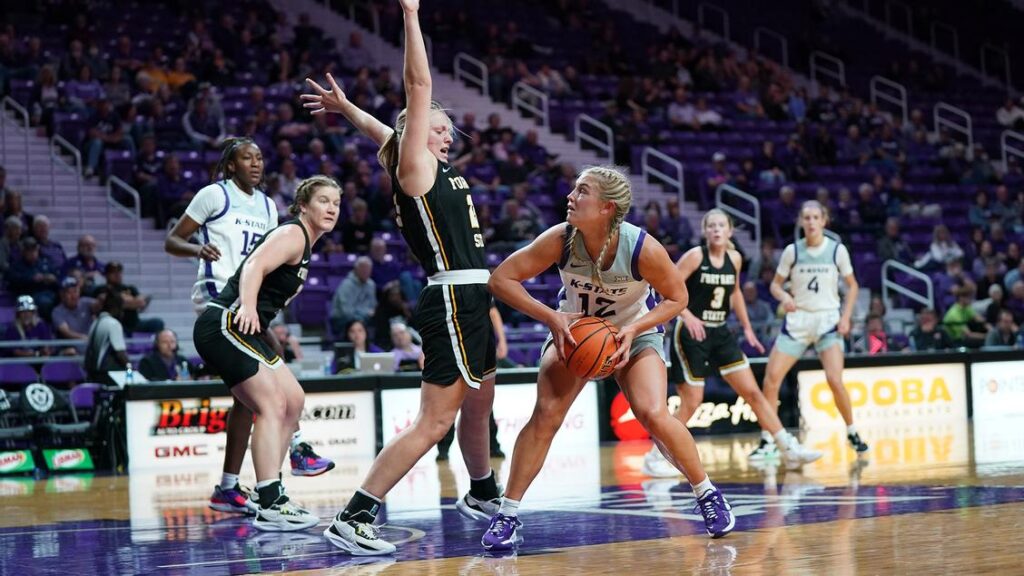 MANHATTAN, Kansas (Kansas State Athletics) – K-State used a 64 percent effort from the field in the fourth quarter to secure a 74-63 win over Fort Hays State on Monday night in Bramlage Coliseum.

HOW IT HAPPENED
– K-State held a one-point lead, 47-46, entering the final quarter.
– The Wildcats used an 8-0 run to jump start its hot shooting in the final quarter and increased its lead to nine, 55-46, with 6:57 remaining in the fourth. Eliza Maupin started the run with an old-fashioned three-point play. Shematsi buried her third 3-pointer of the second half before Gabby Gregory and Maupin each added a free throw.
– The Wildcats completed the final stanza with a 7-of-11 (.636) effort from the field, including a 4-of-5 performance from beyond the arc.
– K-State held Fort Hays State without a made field goal for over five and a half minutes to open the fourth quarter before a layup by the Tigers with 4:20 left brought the margin to 60-50.
– An old-fashioned three-point play from Jaelyn Glenn and a corner three-pointer from Brylee Glenn increased K-State’s lead to a healthy 71-55 with 1:39 remaining.

QUICK FACTS
– Gregory led all scorers with 22 points and pulled in a team-high nine rebounds.
– Brylee Glenn added 15 points.
– Serena Sundell registered a diverse stat line of seven points, eight assists, seven rebounds and two steals.
– The Wildcats finished the night with a 12-of-31 (.387) effort from 3-point range. A season ago, K-State tallied four games with 10 or more connections.

FROM THE HEAD COACH
K-State Head Coach Jeff Mittie
Opening Statement…
“????Well, good to get on the floor against somebody else and kind of get some film to see some things that we can get better at. I thought we played, like a lot of exhibition games, a lot of rotations tonight that we’ll take a look at to see which ones we end up liking. It’s always tough to play a lot of people for both teams. But I thought for an exhibition game, both of us I mean, they only had 12 turnovers and we only had 10. That’s a pretty clean exhibition game for the most part.”

On the biggest improvement since the start of practice…
“Well, honestly, probably our conditioning level in terms of playing at the pace we’re trying to play at and get the shots up. It takes us some time to get that and so I feel like we’re in a better place there. I liked our early push up the floor. What I thought we struggled with was we took too many guarded shots in stretches and we took some off balance rushed shots, so we’ve got to be able to separate that pace with better poise at the end. And that’s what we’ve got to get better at from an offensive standpoint.”

On what they did best tonight…
“You get to see how they respond to another team making a run at them. Until you do, you don’t know how you’re going to do and you’ve got be able to handle those things. I’ve been in this long enough that exhibition games are what they are. You don’t know what you’re going to get. We know we’re getting a really good Hays team, this is a team that was top-five in the country last year. They’re going to be somewhere around in that top-10, top-15 mark this year. So, we know we’re going to get a good quality coached team. But I was pleased to see our group respond when they made a run at us and I was pleased to see our group make some big shots.”

On Gabby Gregory…
“Gabby two years ago was one of the leading scorers in the Big 12, played 36 minutes a game. She had some health things last year that really hampered her and she just never got on track. We’ve got a healthy Gabby Gregory and what you saw tonight is not a surprise. I saw it from the other bench. This is a player that can score at all three levels. She brings a swagger, she thinks every shot is going to go in, loves to compete, loves to play. Lot of really good things. I think her, the Glenn twins and Serena (Sundell) with that small ball are really going to be a tough group to defend.”

UP NEXT
K-State concludes its exhibition schedule on Friday against Newman at 6:30 p.m. For tickets, call (800) 221-CATS or visit kstatesports.com. Friday’s game will air on Big 12 Now on ESPN+.

Cincere Mason graded by PFF as best DB in coverage