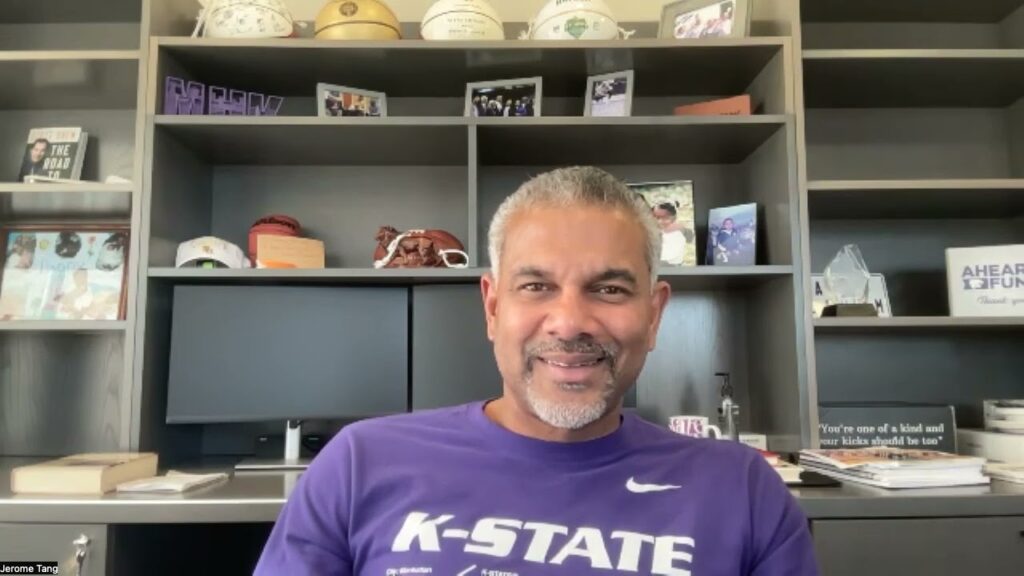 Well, I know the fellas are excited to play a game in front of our fans and hit somebody else. They are probably tired of hearing my voice. Practices have been going well. No major injuries. Guys have done a really good job of competiting and getting a little bit every day. Obviously, everybody saw the Louisville score last night. It’s always good to get an attention getter. These teams are coming in because they are trying to get a win, and we have to respect our opponents and regardless of the name on the front. Be willing to be the aggressor and be the team that is the hungriest. Looking forward to it. I go from being nervous, to being excited. You can feel that it is coming. I’m trying to let it impact the way we coach practice or how I deal with people. That’s been quite interesting.

On not having a K-State media day

Well first thing, I didn’t know it was a requirement. I thought the Big 12 was our media day. We have so much to do, and trying to keep that time we get with them real sacred and keep them together and moving in the right direction.

On where the team is at

I like our talent. I think we’ve got some talent, competitive guys. I think we have guys who have won, know how to win and they get along. I like the group.

On challenges of putting different pieces together

I think that’s the key, how quickly they can figure out what I consider good basketball. There’s a lot of ways. We always say there are a lot of ways to get to four. Two plus two. Two times two. Five minus one. Three plus one. And no one way is more right than the other. It’s how do we want to do it, and how do me and the staff see us getting to four and accomplishing the guys understanding that. That’s going to take some time.

We are guarding. We are rebounding. We are sharing the ball. We are taking practiced shots.

On how excited he is to coach

It’s real. Y’all are going to write real articles if we don’t win this thing, so it’s real. I am excited. I’m excited, nervous. What shows up on the scoreboard and if the ball goes in the hole, it’s going to happen some nights and it’s not going to happen some nights. I just want to see our guys really, really compete and share the ball. We do those two things; it will be a step in the right direction…. I should say share the ball with us. Not with the other team.

I am not married to a starting lineup. It’s the guys who compete the hardest during the week in preparation. So, I know there are a couple of guys out there who it is close with. I just don’t like guys being comfortable. I learned this from Dave Aranda, and I think I’ve heard Coach Klieman say it a couple times, every week is a new week. We are new team. After every game we start over. We have to bring it. We have to build to where we want to get to. I don’t know the starting lineup right now, but honing in on it right now.

It’s going to have to happen after this exhibition. The good problem we have right now, when you are building a program, thinking big picture, is when you’re wondering if we are going to be able to redshirt these guys because they are doing so well. Those are the guys you want to redshirt; you want to be able to redshirt good players. You don’t redshirt bad ones. So, both Dorian [Finister] and Tahj [Manning]. Can we? Or do they contribute to winning right now? Firmly believe that Tahj, Dorian at 22 are better than Tahj, Dorian at 18. So I wouldn’t want to burn this year for either one of them, unless it was good business for the both of us. If it’s good for them, they are playing consistent minutes, helping us wins and we’re able to win games. That would be the tough question we are having to dig through as a staff right now.

On where the offensive identity is

We are going to throw it to the open person and take practiced shots. Basketball is very simple. It’s hard to do simple. Our goal is to do simple better than everybody else. If we shoot practiced shots, we’ll be pretty good. It’s when we take shots that aren’t practiced, that’s what is going to hurt your team. Getting everybody to buy into moving the basketball, moving their bodies and letting the open guy take the shot. That’s what it comes down to.

On development of Desi Sills

Desi has been a blessing. First of all, he’s a winner and a competitor. He really knows how to communicate out on the basketball court and his energy level is contagious. You’ve seen multiple guys competitiveness; energy pick up since Desi has been here. Part of that is that we have another guard, which means somebody is going to have to be on the bench when Desi is on the floor. That stirs the competitive juices. I’m so excited to have Desi on the team.

On what he wants out of bigs

I want them to put pressure on the offense by rim running. Rim running in transition and then I want them to set really great screens and rim run. If they will rim run, they will impact the defense by making a second defender have to help. If a second defender has to help, it’s going to create an opening for somebody else. So, they’re doing that. Catch and finish. It sounds simple, but it’s hard to do. We are going to do simple better.

On concerns, expectations of a slow start

I’m pretty confident we know how to rectify it. The bench does wonders to guys valuing the ball more. Since we have depth, I don’t’ want one mistake to lead to two. Basketball is game of mistakes. Mistakes are going to happen. We can’t turn it over and then hang our head. We have to sprint back and make the next right play. Those things. They are going to take it. I do feel like we have enough ball handlers, good basketball players that we could be a low turnover team.

We are hopefully going to try to get a better grasp of who we are going to redshirt and who we are not. Are we better with three guards on the floor? Or two guards and two wings? Those are things we are going to look at. I think more importantly, it’s to see how these guys respond to fans in the stands. The scrimmage we did, it was closed. So, none of their families could send them text messages to find out why they weren’t playing or why they turned down that shot or any of those things. Their egos, for the ones who aren’t going to play as much as maybe they thought they were going to play, they are going to have to check their egos and be great teammates. There is so much you are looking for in this first opportunity. If you’re asking on the floor, I want to find out what we are better at, as far as lineups. Off the floor, how do our guys response as far as playing, not playing, good plays, bad plays, being in the huddle, fans, cheerleaders and the band and all of that. Just kind of get all of that out of the way.

On depth and versatility

Markquis Nowell and Desi Sills are both terrific ball handlers. They are good playmakers and they both make shots. Cam Carter is developing, continuing to develop, continuing to value the ball. He’s shooting it at a high clip in practice. Excited to see how that translates to the floor.

On how many players are in the rotation

In the private scrimmage, practice we played 11. Tomorrow we are going to probably play 10. Then we will see what happens from there.

On the scrimmage with SIU Carbondale

What we need to work on is our turnovers. We had the kind of turnovers that we have been highlighting practice that we have to get better at these things, the first live action, guys reverted back to their old habits in the first half. In the second half, we did a much better job of taking care of the basketball. What I like is that when the other team made a run, they actually took the lead on us a little bit. We didn’t panic. We settled down, regrouped and kept doing what we do. Was able to push the lead back to double digits in the second half. That kind of maturity, I liked seeing that from our guys.

I’m trying to figure out a way if we are going to be a sets team or can we just play basketball. Can they play the right way with each other? How much of that? So if can’t, then we’ll have to put in more sets. How many more? I don’t know. How much more can this group absorb? Because it’s not just about having it in, it’s about executing it. Not to be plain and not thinking. We’re learning all that right now.

KU suspends Bill Self for 4 games in ongoing infractions case