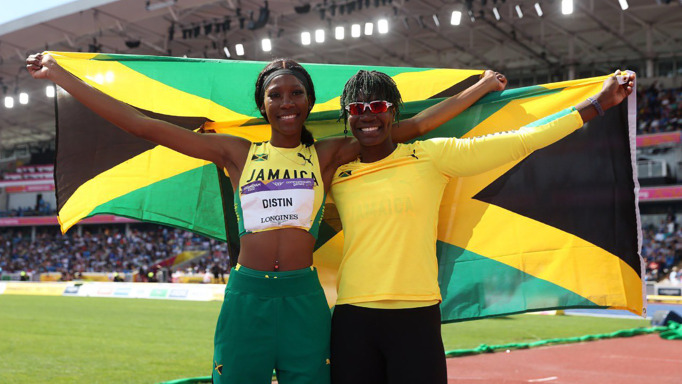 The Games are an international multi-sport event which covers 72 nations currently or formerly part of the English Commonwealth and includes Australia, Canada, India and many countries in Africa, Asia and the Caribbean.

Williamson, who competed for the Wildcats from 2014-16 and won the 2016 NCAA Outdoor Championship, collected her third bronze medal at an international competition (2011 Pan Am U20 Games and 2019 Pan Am Games) with a height of 1.92m/6-3.50 on her second attempt to help Team Jamaica earn the gold and bronze medals at the Commonwealth Games. Teammate Lamara Distin captured the gold medal with a mark of 1.95m/6-4.75 on her first attempt to upset reigning World Champion Eleanor Patterson of Australia.

Distin and Williamson are just the third and fourth Jamaican women to medal in the high jump at Commonwealth Games and first overall since Sheree Francis won the silver in 2010.

Williamson is the second former Wildcat to earn a medal in the high jump at the Commonwealth Games, which wrapped up its 11-day competition on Sunday (August 7). Earlier this week, two-time NCAA champion (2018, 2022) Tejaswin Shankar earned the bronze medal in the men’s high jump with a height of 2.22 m/7-3.25 on his first attempt to win India’s first track and field medal at the Commonwealth Games.

In other action to wrap up the Commonwealth Games, rising senior Kyle Gale nearly helped Barbados to a medal in the men’s 4×400-meter relay on Sunday (August 7), as the quartet finished in fourth place with a season-best time of 3:03.92. Trinidad and Tobago won the gold medal with a time of 3:01.29 followed by Botswana (3:01.95) and Kenya (3:02.41) with the silver and bronze medals, respectively.

The relay team advanced to the finals on Friday (August 5) with a time of 3:07.23 to place fourth in Heat 2 of Round 1 and grab the last qualifying spot.

Gale also competed in the 400 meters, advancing to the semifinals and finishing 14th overall with a time of 46.78.

For more information on the Commonwealth Games can be found here.