MANHATTAN, Kansas (Kansas State Athletics) – With the fastest three goals in program history in the first half, Kansas State cruised to a 3-0 win on Thursday night over Colorado State at Buser Family Park. K-State has won four of its last six matches and improved its record to 4-3-1 on the season, while Colorado State drops to 3-3-1.

HOW IT HAPPENED
– K-State broke open the match with three goals in a school record two minutes and 58 second span. The Wildcats scored in the 17th minute (16:53) and two goals in the 20th minute, scoring just 32 seconds apart in the 20th minute (19:19 and 19:51).
– The Wildcats went up 1-0 with a trio of K-State players involved. Adah Anderson played a ball across the field to the left to Caylee Thornhill. Thornhill danced across the Colorado State 18-yard box, hypnotizing the Rams’ defense with her footwork. Thornhill then slid a pass to a lonesome Kyler Goins on the right side. Goins powered her shot into the left corner for her first tally of the night.
– Goins wasn’t done in the first half. In the 20th minute, Thornhill won K-State a free kick at the edge of the Colorado State penalty area. Thornhill initiated the free kick to Kursten von Klahr, who teed up Goins with a tap pass. Goins blasted her shot into the lower right corner for her second of the night and a 2-0 K-State lead.
– Goins set the school record for fastest consecutive goals by one player in school history with just two minutes and 26 seconds between tallies. The previous record was held by Katie Cramer at Creighton on August 23, 2019, with a time of six minutes and 39 seconds.
– The two goals marked the first multi-goal match of her career and Goins became the fourth player in school history with two or more goals in a match.
– Just 32 seconds later, Goins drew the attention of the Rams defenders on the right flank. She played a slotted pass to Bailey Nemechek. The product of Fort Collins, Colorado, saw her shot find twine in the left corner for the 3-0 K-State lead.
– Goins tied the school record for points by a single player in a match with five, equaling the mark held by Brookelynn Entz from March 28, 2021, of five at Missouri.
– For the season, Goins leads the Wildcats with five goals scored and a team high 11 points. She is the third player in program history (Brookelynn Entz and Marisa Weichel) to score five or more goals in a season. Her five goals are a new career season-high.

QUICK FACTS
– K-State is 3-0-1 all-time against teams from the Mountain West Conference.
– The Wildcats are 3-0-0 all-time against Colorado State.
– Kansas State improves to 15-25-5 all-time in the month of September. K-State has now won
– With its goals on Thursday, K-State has scored a goal in the first eight matches of a season to extend its school record mark. The Wildcats have also set the school record for any stretch of consecutive games with a goal with eight straight games.
– K-State’s three first half goals tied the school record for goals in a first half.
– K-State’s 11 team points tied for the third most in school history in a single match and the most since registering 11 at Colorado State on Sept. 5, 2021.
– With her two goals on Thursday, Goins joined Entz as the only two players in school history with 10 or more career goals. Goins ranks second with 10 career tallies.
– Thornhill and Anderson each registered their third assists of the season on Thursday night. The duo leads the team in assists.
– Thornhill boosted her career assists total to five and moved into a tie for sixth on the K-State career assists list.
– Anderson dished her fourth career assist and moved into eighth on the K-State career assists list.
– Junior Alaina Werremeyer collected her ninth career shut out and moved into a tie for second in program history for career shutouts, tying Emma Malsy (2018-19; 8). Werremeyer remains in second on the K-State career wins list with her ninth and is one short of tying the school record held by Miranda Larkin (2016-17; 10).
– Werremeyer’s four shutouts this season and a new single-season high and ranks fourth in school history for shutouts in a season.
– Werremeyer owns a current shutout streak of 245:56 and owns two straight shutouts.
– K-State ended the night with a 16-4 lead in total shots, including an 8-0 edge in shots on goal. The Wildcats are now 4-1-1 this season when recording more shots than its opponent and 21-14-3 all-time when achieving the lead in shots.

FROM THE HEAD COACH
K-State Head Coach Mike Dibbini
On the three quick goals…
“It was fun. It was a good performance on our part, especially the first half. It was really fun to watch their combination plays and the way they read each other on the field and the way they connected. It was just fun to watch.”

On Kyler Goins performance…
“She’s got it going on, she’s fired up. She knows it’s her senior year and she wants to continue to be a leader out there and do what she does best and try to get those goals for us.”

On the defensive performance…
“The shut out was the key, we didn’t concede goals and we knew we’re going to have our chances and we put those away early. It would have been nice to have a little bit more of a lead but we can’t be that greedy.”

On Caylee Thornhill’s performance…
“She works and she does all the intangibles that we need from from one of the forwards as well. She hasn’t gotten on the board yet with scoring but she does a lot of the things that are important, intangible-wise, for us to be successful.”

FROM THE FIELD
KYLER GOINS, SENIOR FORWARD
On the flurry of goals…
“It was really fun. I want to say I love playing with Bailey (Nemechek) and I know this is her first goal too. It was extremely exciting getting a goal but at the same time seeing her get that goal and being able to play her that ball. That’s what really made the one for me.”

On the defensive performance after the big lead…
“I think sometimes we find ourselves parking the bus a little bit, like sitting back after we do score a goal. I think when we got that 3-0 lead we’re like ‘okay, now we can park the bus.’ Usually after that 1-0 we’re like let’s sit a little bit. We didn’t do that this game. I’m really glad we didn’t because we always get that 1-0 and it’s about time that we did it. But I think that was just kind of our mindset after that third goal. Obviously we want another one. I wanted the hat trick. But you’ve got to put the team first and you want to keep that lead. You want that shut out.”

On the team’s confidence after the performance…
“It’s our first game that we’ve been able to get more than one goal and that right there is confidence going against teams like TCU and Texas, you know, teams that are higher ranked, just being able to play and stay in the game there is good. So this just shows that we can score. So I think that right there is just kind of our confidence like, ‘Hey, we’re a good team, we can compete with any student here.’

UP NEXT
K-State completes its 2022 non-conference schedule on Sunday at 1 p.m., as the Wildcats travel to Brookings, South Dakota to face South Dakota State. Sunday’s match will be streamed on Jackrabbits All-Access (subscription required). 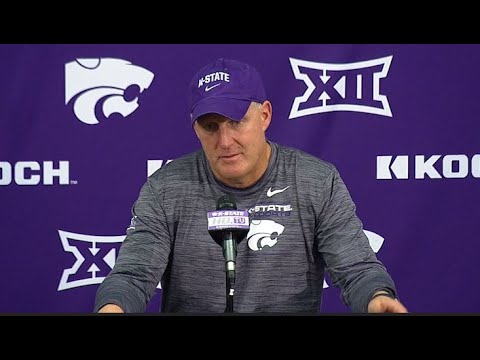 Cats Can’t Catch A Break In Loss To Oklahoma