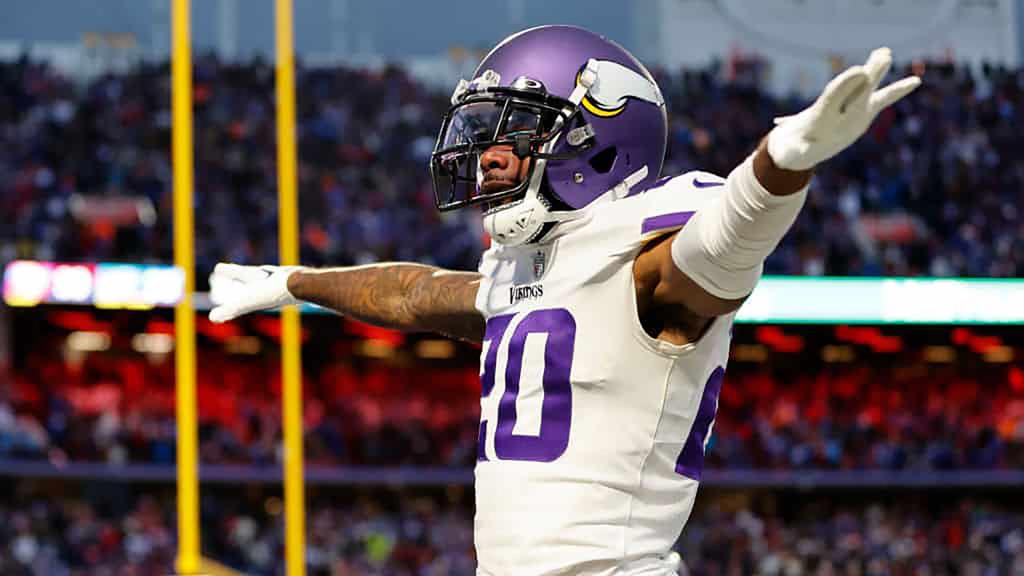 MANHATTAN, Kan. (Kansas State Athletics) – Each week throughout the 2022 season, k-statesports.com recaps the action for the 14 former Kansas State football players currently in the NFL. This week, we also take a look at Dalton Schoen, who helped the Winnipeg Blue Bombers win the West Division of the CFL and will play in the 109th Grey Cup on Sunday.

Dalton Schoen, WR – Winnipeg Blue Bombers
Schoen came away with three receptions for 36 yards – including a 19-yard touchdown reception – as the Blue Bombers earned a 28-20 victory over the BC Lions in the West Division final. In 18 games this season, Schoen has 70 catches for 1,441 yards and 16 touchdowns as he is one of two finalists for the CFL Most Outstanding Rookie award, which will be announced on Thursday. Schoen and the Blue Bombers will play in the 109th Grey Cup against Toronto on Sunday, as Winnipeg is looking to become the first three-peat Grey Cup champion in 42 years.

Timmy Horne, DL – Atlanta Falcons
Horne, a rookie free agent who has seen time in every game this season, registered three tackles among his 15 defensive snaps and also saw time on six special teams plays in Atlanta’s 25-15 loss Thursday night at Carolina. In 10 games this year, Horne has 12 tackles and a pass breakup on 180 defensive snaps. The Falcons fell to 4-6 this season but are just a game back of first place in the AFC South, and they host Chicago on Sunday.

Elijah Lee, LB – Kansas City Chiefs
In his sixth NFL season and first with Kansas City, Lee is on the Chiefs’ practice squad. The Chiefs picked up a 27-17 home win over Jacksonville to improve to an AFC-best record of 7-2. Kansas City travels to face the Los Angeles Chargers on Sunday night.

Tyler Lockett, WR – Seattle Seahawks
Lockett, who registered his 97th-career start, had three catches for 42 yards – including a 21-yard touchdown – in Seattle’s 21-16 loss to Tampa Bay in Munich, Germany. He now has 50 touchdowns in his career, the second most in franchise history. In 10 games this season, Lockett has 54 receptions for 640 yards and five touchdowns. He ranks ninth in the NFL in both receptions and touchdown catches. The Seahawks fell to 6-4 on the season but still lead the NFC West entering their bye week.

Cornelius Lucas, OL – Washington Commanders
Making his sixth-straight start, Lucas was in for 42 of Washington’s 83 offensive snaps in the Commanders’ 32-21 win at previously unbeaten Philadelphia on Monday night. An eighth-year pro who is in his third season in Washington, Lucas has been in for 374 offensive plays this year. The Commanders are now 5-5 this season, and they remain on the road to play Houston on Sunday.

AJ Parker, DB – Detroit Lions
Parker, who is in his second NFL season, is on the Lions’ practice squad. In three games this year, Parker has 11 tackles. The Lions earned a 31-30 victory at Chicago to improve to 3-6 this season, and they travel to face the New York Giants on Sunday.

Byron Pringle, WR – Chicago Bears
Coming off injured reserve and seeing his first action since Week 3, Pringle had one catch for 12 yards in Chicago’s 31-30 home loss to Detroit. Pringle has three catches for 45 yards in four games this season, his first with the Bears. Chicago is now 3-7 this year as it travels to take on Atlanta on Sunday.

D.J. Reed, DB – New York Jets
Reed and the New York Jets were off last week. Reed, who is in his fifth NFL season and first with the Jets, has 42 tackles, seven pass breakups, an interception and a forced fumble in nine games this season. The 6-3 Jets, who are a half game out of first place in the AFC East, open the second half of their season at New England on Sunday.

Dalton Risner, OL – Denver Broncos
In his fourth NFL season – all with Denver – Risner was in for all 80 offensive snaps of the Broncos’ 17-10 defeat at Tennessee. Risner has seen time on 3,431 of the Broncos’ 3,854 offensive snaps (89.0%) over his 56 starts since he began his career in 2019. Denver dropped to 3-6 this season, and the Broncos host the Las Vegas Raiders on Sunday.

Duke Shelley, DB – Minnesota Vikings
In his first season in Minnesota, Shelley made two impact plays prior to the game-winner for the Vikings in a 33-30 overtime win at Buffalo. With the Vikings clinging to a three-point lead with 3:42 left in overtime, Shelley made a tackle on kickoff coverage. Later, with the Bills inside Vikings red zone, Shelley broke up a pass in the end zone on a potential game-winning touchdown prior to an interception that ended the game. The victory moved Minnesota to 8-1 this season – which is tied for the best record in the NFC – and the Vikings host Dallas on Sunday.

K-Stater Duke Shelley just helped the Minnesota Vikings beat the Buffalo Bills with this critical pass break-up on the next-to-last play of overtime. I see you ?@DukeSaysGo?! pic.twitter.com/hghipg6YM0

Kiondre Thomas, CB – Green Bay Packers
In his first season in Green Bay, Thomas is on the Packers’ practice squad. The Packers snapped a five-game losing streak via a 31-28 victory over Dallas, and they improved to 4-6 on the year prior to hosting Tennessee on Thursday night.

Skylar Thompson, QB – Miami Dolphins
Thompson saw action for a third time this season, completing his lone pass attempt for 17 yards in Miami’s 39-17 home win over Cleveland. A seventh-round draft choice in this year’s draft, Thompson is 27-of-47 for 272 yards and an interception in three games this season, which includes a start. Miami is now 7-3 on the year to lead the AFC East as the Dolphins enter their bye week.

Cody Whitehair, OL – Chicago Bears
Making his 101st-career start, Whitehair was in for all 61 offensive plays in Chicago’s 31-30 home loss to Detroit. The Bears are now 3-7 this season, and they travel to face Atlanta on Sunday.

Jordan Willis, DL – San Francisco 49ers
Willis returned from injured reserve – playing for the first time since opening weekend – as he had four tackles and a sack to help San Francisco pick up a 22-16 home win over the Los Angeles Chargers on Sunday night. The win improved the 49ers’ record to 5-4 on the year – a half game out of first place in the NFC West – and they play at Arizona on Monday night.

Russ Yeast, S – Los Angeles Rams
A seventh-round selection in this year’s draft, Yeast made a tackle among his three defensive snaps and was also in for 17 special teams plays in the Rams’ 27-17 loss at Arizona. In seven games this season, Yeast has five tackles for the 3-6 Rams, who travel to face New Orleans on Sunday.