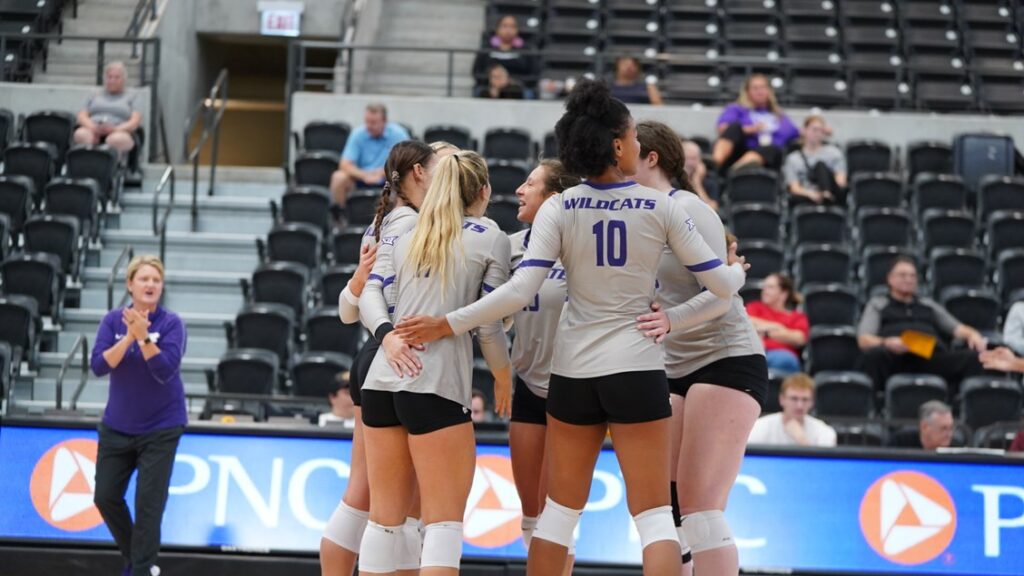 Bolding tallied four aces in the first set alone Saturday, as the Wildcats finished with eight in the opening frame. Morris finished with a dozen digs in pushing her streak to 10 straight matches with at least 10 digs. The match also marked Morris’ 50th career match with double-figure digs.

Elena Baka and Shaylee Myers led the offense with 11 kills apiece, with Myers hitting a team-high .474 to go with seven digs and three blocks. Baka pitched in three aces and eight digs.

K-State held a 40-27 edge in total kills and limited St. Thomas to a .110 hitting percentage. The Cats have suppressed their opponents below the .200 mark in seven of 10 matches this season.

Dalia Wilson and Brenna Schmidt each finished with season highs in kills, with four and three, respectively. Schmidt added a team-high six blocks.

The Tommies reached the 10-kill mark just once, coming in the third set. Lauren Galvin led her team with a dozen kills and Libby Mattila ended with seven.

On utilizing K-State’s bench in the match …
“I’m excited. At one point in time, I looked out on the floor and we had four freshmen on the floor and thought they were playing exceptionally well. I am excited about their development and improvement and excited about their future. The only way they can get better is to get them out there and give them some experience. We finished a stretch where we just played four matches in four days, so we are experiencing some pretty significant physical, mental and travel fatigue right now. We thought getting in some fresh bodies could rejuvenate us. The thing I was the proudest of was that we sustained a really high and consistent level of play. We stayed really focused and engaged in the match, from start to finish.”

On K-State’s success at the service line…
“We’re spending time on it and we make it important. We have really prioritized it, as early as last spring, feeling we needed an upgrade there from a defensive perspective. We attacked it a lot last spring and going into the fall we have prioritized it as an important part of our defensive system. And I think our players have bought into that. Sydney has tremendous pace and is unafraid. She goes back and does the same thing over and over and she’s going to drive it at you with some pace. She’s pretty confident about it and that helps her a lot.”

HOW IT HAPPENED
Set One – K-State 25, St. Thomas 12
K-State tallied eight aces and 11 kills at a .375 in a wire-to-wire opening-set victory. Baka picked up six kills on 12 attempts without an error and Bolding tossed up four aces. Four different Wildcats registered an ace, including the first career ace from Wilson.

The Cats put together three separate scoring runs of at least four straight points, including a six-point stretch on Bolding’s serve that saw the lead inflate to 20-8. Bolding added two kills on three swings and a block.

Defensively, K-State held the Tommies to nine kills at a .138 pace behind three blocks. Schmidt picked up two blocks to lead the Wildcats.

Galvin led St. Thomas with four kills and Mattila chipped in a pair.

Set Two – K-State 25, St. Thomas 15
K-State’s offense hit north of .300 for the second straight set, producing 12 kills on 24 attacks in creating a two-set lead. Myers added a team-high four kills on seven attempts without an error along with two blocks.

K-State’s five-point run turned a two-point lead into a seven-point spread at 19-12. In total, the Wildcats finished the frame by scoring 11 of the final 14 points.

Baka and LeGrand both picked up a service ace to increase K-State’s total to 10 through two sets.

The Tommies managed eight kills while committing seven errors for an .040 efficiency. Galvin added four more kills and had eight through two sets.

Set Three – K-State 25, St. Thomas 16
The Wildcats hit .364 in racking put a match-high 17 kills, with six coming from Myers on nine swings. Baka, Fernholz and LeGrand all added three kills in completing the Cats’ second sweep of the weekend.

Morris piled up seven of K-State’s 19 digs, helping limit the Tommies to a .135 team efficiency.

An early 5-0 run on Ramsey’s serve put K-State in front 11-5. The Cats only trailed once in the set after St. Thomas scored the first point of the third set.

St. Thomas produced 10 kills, its highest total of any set, with four coming from both Galvin and Mattila.

UP NEXT
K-State makes a midweek stop at Kansas City Wednesday for a matchup with the Roos, with first serve set for 7 p.m. at Swinney Center. The match can be seen on KCRoos.com with radio coverage on News Radio KMAN (93.3 FM).

PODCAST: Tulane Preview and thoughts on Drinkwitz and Forde’s disrespect 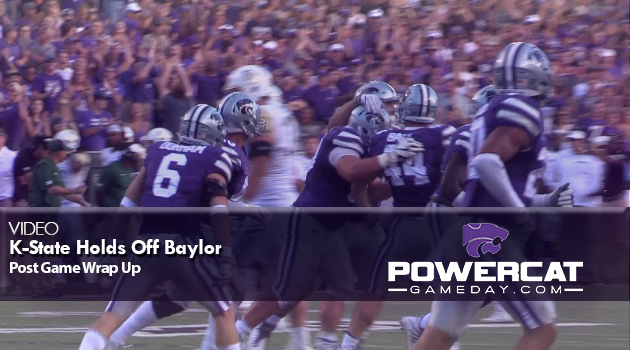 K-State holds off Baylor in Manhattan