OGDEN, Utah – A milestone goal late in the first half proved to be the difference on Thursday afternoon, as Kansas State collected its second win of the season with a 1-0 win over Weber State at Wildcat Soccer Field. K-State improves to 2-2-1 on the season, while Weber State drops to 0-4-0.

HOW IT HAPPENED
– In the dying embers of the first half, senior Marisa Weichel put the Wildcats on the board with her first goal of the season. Her sister, Maddie Weichel, attempted a free kick from 23 yards in the center of the field following a foul by Weber State.
– Maddie Weichel’s left-footed attempt was saved by Weber State goalkeeper Mekell Moss with a diving stop toward the right post. The ball caromed directly to Marisa Weichel, who emphatically booted the orb into the wide open frame.
– With the goal, K-State reached 100 goals in its seven-year, 107-match history.
– Marisa Weichel entered the first half off the bench for the first time this season and was the first K-State substitute to score a goal this season and the first since Porter List against UTRGV on September 19, 2021.
– K-State, who used 21 of the 22 players that traveled to Utah, dominated play in the second half building up a 10-2 shot advantage and controlling possession for a majority of the second 45 minutes.
– Junior goalkeeper Alaina Werremeyer collected two saves to secure her second shutout in three matches.

QUICK FACTS
– K-State is 1-1-1 all-time against teams from the Big Sky Conference.
– The Wildcats are 1-1-0 all-time against Weber State.
– K-State completed its three-match road trip with a 2-1-0 record. This is the second straight season K-State has won two of its first three road matches in a season.
– Kansas State improves to 13-25-5 all-time in the month of September.
– When scoring first, K-State improves to 2-1-1 this season and 26-10-2 all-time.
– Marisa Weichel carded her seventh career goal at K-State. With her first half tally, Weichel moved into a tie for third in school history for career goals.
– With her two points on Thursday, Marisa Weichel moved into a tie for fifth in school history for career points with 15.
– When either Maddie or Marisa Weichel register at least one point in a match, K-State is 7-1-1.
– With its goal on Thursday, K-State has scored a goal in the first five matches of a season for the first time in program history. K-State also tied the school record for any stretch of consecutive games with a goal, which has now been done four times.
– Werremeyer is third in program history for career shutouts with seven and remains in second for career wins with her seventh.
– K-State finished the day with a 13-7 lead in total shots and a 4-2 edge in shots on goal.
– In corner kicks, K-State notched a 6-3 advantage.

FROM THE HEAD COACH
K-State Head Coach Mike Dibbini
On using 21 players today and keeping possession…
“That’s extremely important when we’re on the road for the third straight game and playing in some elevation. We had to manage the game the way we did today in a way to get the most out of our players. We had to keep the legs fresh and we have to keep our movement fresh and that’s what we did today.”

On the 100th goal in school history…
“It’s another milestone for this program and we’re growing. We need to be proud of that. It’s definitely an honor for our program, but we have a lot more work to do.”

FROM THE FIELD
K-State Senior Forward Marisa Weichel
On the free kick that led to the goal…
“I knew Maddie was going try to shoot the ball and I was honestly just kind of watching the keeper and seeing what she was doing and right when Maddie shot it I knew there was a chance she might bobble it. I knew I had to go once Maddie shot the ball. It is cool, we’ve never had a sister-sister goal yet.”

On scoring the 100th goal in program history…
“I think it’s awesome. It’s just a testament to how we continue to grow and we’re continuing to get better and just what exactly like the future holds for us.”

On maintaining possession for a majority of the second half…
“It just shows how much depth we have and how much talent we really have on this team, which is awesome and it’ll help us come Sunday to to be able to have more fresh legs.”

UP NEXT
K-State returns to Buser Family Park on Sunday at 1 p.m., as the Wildcats host Purdue. Sunday’s match is a Wildcat Weekend match, as fans can purchase general admission ticket for $3 when showing their football ticket from Saturday’s game. Tickets may be purchased at the Buser Family Stadium ticket booth, at kstatesports.com/tickets or by calling 800-221-CATS

Talking with the Wildcats at Big 12 Media Day 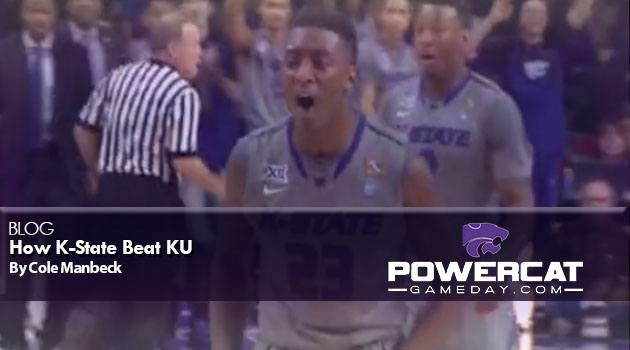