MANHATTAN, Kansas (Kansas State Athletics) – A pair of Wildcats saw their names on preseason watch lists on Tuesday, as Kansas State defensive end Felix Anudike-Uzomah was one of 85 players named to the Bronko Nagurski Trophy watch list, while offensive lineman Cooper Beebe was named one of 89 players on the Outland Trophy watch list, the Football Writers Association of America (FWAA) announced. 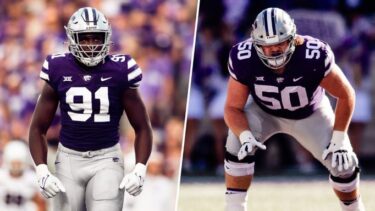 It is the first time either player has been named candidates for those respective awards. The Nagurski Trophy is presented to the nation’s most outstanding defensive player by the Charlotte Touchdown Club. Anudike-Uzomah was one of 10 Big 12 defenders on the list, and his inclusion on the initial list in 2022 marks the 11th time in the last 12 years a Wildcat has been up for the award. Most recently, defensive end Wyatt Hubert was a preseason candidate in both 2019 and 2020.

Beebe is also one of 10 players from the Big 12 on the watch list for the Outland Trophy, which goes to the nation’s most outstanding interior lineman on either side of the ball. He is the first Wildcat in the running for the award since Dalton Risner was a candidate in 2018.

A junior from Kansas City, Missouri, Anudike-Uzomah was one of the top defensive players in the nation in 2021 as he earned All-America honors from Phil Steele, and he was a First Team All-Big 12 performer by both the league’s coaches and Associated Press in addition being named the Big 12 Defensive Lineman of the Year by the coaches. He tied for the national lead in forced fumbles per game (0.46), while he ranked 11th nationally in sacks. His 11.0 total sacks tied for fifth in school history, which included a single-game record tying 4.0 sacks against TCU en route to Walter Camp National Defensive Player of the Week, Bednarik Award Player of the Week, Bronko Nagurski Trophy Player of the Week and Big 12 Defensive Player of the Week honors.

Perhaps his biggest play of the season, Anudike-Uzomah tallied a safety at Texas Tech, a play that came with K-State trailing, 24-10, and gave the Wildcats life in a game in which they came back to win, 25-24, and vaulted them to their four-game winning streak.

Beebe, a product of Kansas City, Kansas, was a 13-game starter at left tackle in 2021 who picked up First Team All-Big 12 honors from both the league’s coaches and Associated Press, the youngest offensive lineman to be named to the first team by either organization. He was the first Wildcat freshman or sophomore offensive lineman to be named a First Team All-Big 12 performer since Dalton Risner in 2016, and he also earned votes for the Big 12 Offensive Lineman of the Year award from the league’s coaches. Beebe, who did not allow a sack among his 367 pass blocking snaps, helped K-State tie for second in the Big 12 with 29 rushing touchdowns, while the Wildcats’ 4.83 yards per rush ranked sixth in school history.

The Wildcats open the 2022 season with three-consecutive home games beginning with a tilt against South Dakota on Sept. 3, a game that will kick at 6 p.m. and be shown on Big 12 Now on ESPN+. K-State then hosts former Big 8/12 foe Missouri in an 11 a.m., contest on Sept. 10 on ESPN2, while it closes out non-conference action by hosting Tulane on Sept. 17, in a game that starts at 2 p.m. and also shown on Big 12 Now.

Tickets for the seven-game home slate can be purchased online at www.kstatesports.com/tickets or by phone at 1-800-221-CATS.