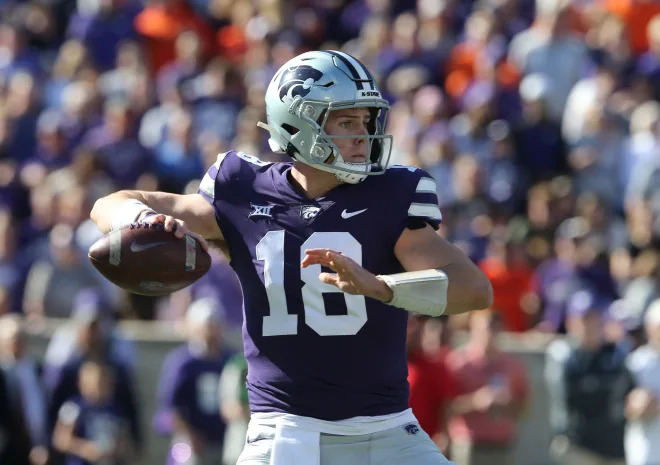 On Saturday, No. 22 Kansas State routed No. 9 Oklahoma State 41-0 at Bill Snyder Family Stadium behind a career day from quarterback Will Howard who threw for four touchdown passes.

The Wildcats (6-2, 4-1 Big 12) opted to take the opening kickoff and scored a touchdown on their opening drive of the game when Kade Warner caught the game’s first touchdown. From that point, the Wildcat offense didn’t slow down entering halftime with a commanding 35-0 lead over the No.9 ranked Cowboys (6-2, 3-2 Big 12).

With the win, Kansas State clinches bowl eligibility for the third time under Chris Klieman who was hired before the 2019 season.

Last week against TCU, Will Howard stepped into the game for an injured Adrian Martinez and led touchdown drives on four of his first five possessions. Against Oklahoma State — in his first start of the 2022 season, Howard electrified the K-State passing attack with four first-half touchdown passes and 224 total passing yards.

Howard’s first touchdown pass of the game went to Kade Warner on a fourth and 10 play from the Oklahoma State 38-yard line. Howard was able to effectively drop the football in between double coverage as Warner crossed the goal line to put K-State up 7-0.

Wide receiver Phillip Brooks found the end zone on a 31-yard catch up the seam to Kansas State ahead 21-0.

Warner later found the end zone on a third and 8 screen pass that went for a 41-yard catch and run, which put the Cats up 28-0 in the second quarter.

Warner entered the 2022 season with zero career touchdowns. But he’s caught four touchdowns on the season after the two touchdowns on Saturday. He previously had touchdown catches vs. Tulane and last week at TCU.

Howard ended the game with 296 yards and four touchdown passes while completing 21-of-37 passes on the afternoon.

Preseason All-American Deuce Vaughn has had a bit of an up-and-down season entering Week 9. But on Saturday against the Cowboys, Vaughn had his best game of the season and it started on the Wildcats’ second drive when he busted up the middle of the Cowboy defense untouched for a 62-yard touchdown run.

Vaughn later electrified the Wildcat homecoming crowd with a diving touchdown catch — Howard’s fourth touchdown pass of the first half — in the front of the end zone to put the Wildcats ahead 35-0 with just seven seconds left in the first half.

For the second time this season, Kansas State’s defense held an opponent scoreless at Bill Snyder Family Stadium. After holding South Dakota scoreless in the season opener, the Wildcats’ defense pitched their second shutout of the season by holding Oklahoma State scoreless.

Entering the week, Oklahoma State was averaging 44.7 points per game and the offense was second in the Big 12 in passing yards per game at just over 313 yards per contest. But the Wildcat defense didn’t allow the Oklahoma State offense to find any momentum at all during the game.

Quarterback Spencer Sanders finished the game with 147 passing yards, significantly below his season average. Sanders also completed just 13-of-26 passes in the afternoon. Kansas State All-Big 12 cornerback Julius Brents caught his second interception of the season, his first came in the Wildcat win over Texas Tech.

As an offense, the Cowboys ran for just 54 yards on the day. Running backs Jaden Nixon and Deondre Jackson had just 31 combined rushing yards on the afternoon. Sanders, a potent runner himself, had just negative nine rushing yards against the K-State defense.

In total, Oklahoma State’s offense totaled just 217 yards on the afternoon, their lowest total of the season. The Wildcat defense allowed the Cowboy offense to reach K-State territory just three times on Saturday.

Kansas State wide receiver Malik Knowles had his best game of the season on Saturday. The Wildcat wide receiver brought in eight catches for 113 yards, the most yards of the season for the speedy pass catcher in his career. His previous career-high was 112 yards in the Wildcats’ win over Southern Illinois in 2021.

Knowles’ most memorable play of the season is his long catch and run at Iowa State earlier this season that dramatically ended with a fumble in the end zone. But since the embarrassing play against the Cyclones, Knowles has proven to be one of the Wildcats’ best wide receivers.

Last week against TCU, Knowles was able to catch four passes for 69 yards, which included an impressive catch on a post pattern that was downed at the Horned Frog’s one-yard line.

Along with Warner, the Wildcats look to be having a set of wide receivers potentially merging as threats in the final few weeks of the season.

Next week Kansas State hosts Texas (5-3, 3-2 Big 12) at Billy Snyder Family Stadium. The Longhorns are coming off a loss at Oklahoma State last season but were idle this week. Texas’ three losses this season all come in games where they held a lead in the fourth quarter, and their losses vs. Texas Tech and Oklahoma State occurred with the Longhorns holding multiple scores leads.

Kansas State head coach Chris Klieman is looking for his first win vs. Texas next week and the Wildcats haven’t beaten Texas since 2016 when Charlie Strong was in his last season as the Longhorn head coach.