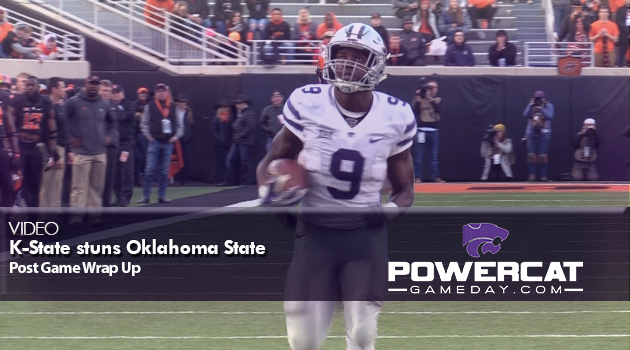 One of the strangest weeks in Bill Snyder’s tenure as Kansas State’s football coach had one final twist.

With the program’s uncertain future in the spotlight and pegged a 20-point underdog in Las Vegas, K-State beat No. 10 Oklahoma State Saturday afternoon, 45-40, for the Wildcats’ first win in Stillwater since 1999.

After OSU (8-3, 5-3) took a 10-7 lead in the first quarter, the Wildcats outscored the Cowboys 35-3 in the middle quarters to open up a 42-13 lead. Byron Pringle and Skylar Thompson were the undisputed stars of K-State’s offense. Pringle caught three touchdown passes and also scored on an 89-yard kickoff return.

“Skylar did awfully well,” Snyder said. “We were able to get the ball down field and get some big plays. We were in a drought with big plays.”

As dominant as the offense was, K-State’s defense may have been just as impressive. OSU star quarterback Mason Rudolph only found a rhythm late in the game when the Cowboys made a furious comeback bid. He threw two interceptions, tying a season high.

K-State (6-5, 4-4) very nearly coughed up the 29-point lead it built in the third quarter. OSU scored 20 straight points to end the game and got the ball back with 2:12 to go, trailing by just five.

But Rudolph threw four straight incomplete passes as the Wildcat defense held on.

Snyder said he was more “frightened” than nervous toward the end of the game, but “at the end of the day, they made the stop that won the ball game.”

In the final minutes, Thompson was hurt on a hit that forced a costly fumble, but he did return for K-State’s final drive.

The win was Bill Snyder’s first as an unranked team against an AP Top 10 team on the road.

K-State will conclude the regular season next week against Iowa State before learning its bowl destination.

After the game, Snyder was asked about a Brett McMurphy report that K-State had planned to make Jim Leavitt the program’s coach-in-waiting last year before Snyder rejected it.

Snyder didn’t have much to say on the matter, stating “I don’t know who Brett McMurphy is.”

“I’ve heard there’s an article out there. I don’t know who wrote it or what it said.” 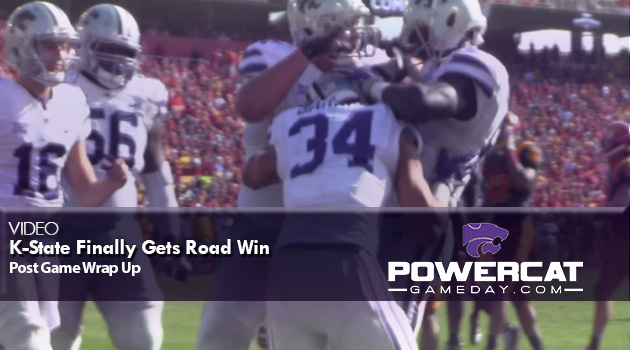 Kansas State Hangs on for 31-26 Victory