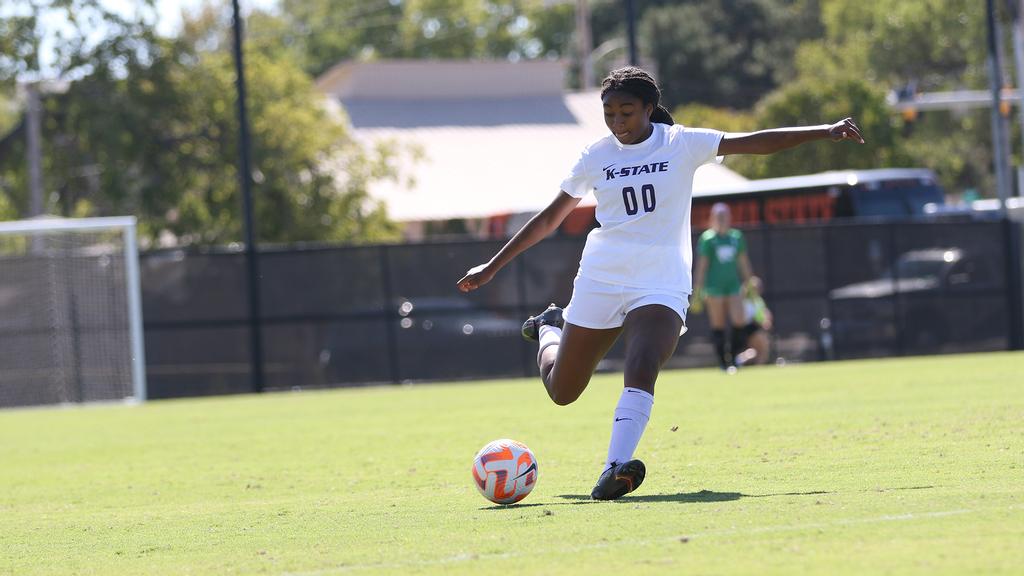 • Friday’s match will be available on Big 12 Now on ESPN+. The broadcast team will be Brian Smoller (play-by-play), Oscar Montenegro (analyst) and Jazsmin Halliburton (sideline) will have the call.
• Tickets for Friday’s match can be purchased by contacting the K-State Athletics Ticket Office at (800) 221-CATS, visiting kstatesports.com/tickets or at the Buser Family Park ticket booth.

Last Time Out
• K-State ended a five-match losing streak in Big 12 openers and four-match losing streak in Big 12 matches dating back to the final four league matches of the 2021 season during the opening weekend of its league schedule.
• In the 2022 league opener on Sept. 22, at Iowa State, Kansas State recorded 15 shots including 10 on goal but came away with a 0-0 draw against the Cyclones.
• This marked the first time K-State secured at least a win or draw in its Big 12 opener, ending a five-match losing streak.
• Junior goalkeeper Alaina Werremeyer improved her career season-high with her fifth shutout of the season, as she made five saves. This was her 16th career match with five or more saves and third this season.
• Werremeyer tied the school record for career shutouts with her 10th and also set the career school records for matches played in goal, career starts in goal and career minutes played in goal.
• The Wildcats returned to Buser Family Park on Sunday, Sept. 25, to host Oklahoma State. The Cowgirls extended their winning streak to six with its lone goal coming in the fifth minute.
• After opening the season with a school record of eight straight matches with a goal, K-State has now been held goalless in the last three matches.

Firing Range
• While setting the school record for consecutive games with a goal at eight, Kansas State has pummelled the opposing net with shots – notching 160 attempts through 11 matches.
• The Wildcats rank fifth in the Big 12 in shots. K-State ranks fifth in the league and 81st in the nation in shots per game (14.55 spg).
• K-State has recorded 20 or more shots in a match three times this season, including 27 against Northern Colorado on Aug. 21.
• Kansas State set the school record for shots on goal in a Big 12 match, as the Wildcats registered 10 shots on goal at Iowa State on Sept. 22, 2022.
• In the 2021 season, the Wildcats were seventh in the Big 12 in total shots (248) and for shots per game (13.78). The 248 shots were the second most in program history.
• The Wildcats had five matches with 20 or more shots in the 2021 season. K-State recorded a season-high 27 shots against UTRGV on Sept. 19, which tied for second in program history for shots in a single-match and were the most since the Wildcats tallied 27 against Arkansas State on Aug. 29, 2019.
• The school record for total shots in a season is 276 set in 2019, while the shots per game mark stands at 15.3 also in 2019.

K-State Posts Blank Scoresheets
• The Wildcats have notched five shutouts in the 2022 season, the fifth time K-State has registered five or more shutouts in a season.
• K-State recorded its first shutout of the season with a stellar team defensive effort at UTRGV. The Wildcats kept UTRGV off the scoreboard and surrendered just three total shots, the second fewest shots allowed in a match in program history and fewest in a shut out.
• K-State added its second shutout of the season with a 1-0 win at Weber State on Sept. 1.
• The Wildcats’ third shutout came against Ivy League foe, Yale, on Sept. 9.
• In the 2021 season, the Wildcats tied the school record for shutouts in a season with six, which included a school-record shutout streak of 317:55. The Wildcats tied the school record for consecutive shutouts with three.
• In its seven seasons of action, the Wildcats have registered 35 shutouts. Kansas State owns an all-time record of 26-0-9 in games allowing zero goals.
• Of the 35 shutouts in program history, three goalkeepers own 29 of them. Miranda Larkin set the school record for career shutouts with 10, while active goalkeeper Alaina Werremeyer joined Larkin with her 10th shutour and former goalkeeper Emma Malsy owns nine.
• The active goalkeepers on the K-State roster – Rachel Harris, and Werremeyer – have tallied 11 shutouts in their K-State careers. Werremeyer ranks tied for the school record for career shutouts with 10, while Harris owns one.

W for Werremeyer
• Junior goalkeeper Alaina Werremeyer has registered a strong start to the 2022 season and is ascending the K-State career wins and shutouts lists.
• At Iowa State on Sept. 22, Werremeyer notched her 10th career shutout and fifth this season. She is second in school history for career wins (9) and is tied for the career record for shutouts (10).
• This season, she has 10 starts with a record of 4-5-1 and a career-high five shutouts. Werremeyer has collected 35 saves (3.5 spg) and a save percentage of .795. She owns a goals against average of 0.90 and tallied a career-best streak of 295:34 consecutive shut out minutes from Sept. 4 to 18.
• In the 2021 season, Werremeyer finished with a career-best 1.54 goals against average and a save percentage of .786 with a career-high 88 saves.
• The product of Blue Springs, Missouri, owns the program career records career matches played in goal (34) and career starts in goal (33) and career minutes (3,086:14) in goal and is second in program history for career saves (165).

Goins With Goals
• Senior Kyler Goins has paced the Wildcat attack this season.
• This season, Goins leads K-State with five goals including two game-winning goals, 11 points and 16 shots on goal. She is tied for the team lead in total shots with 31.
• Goins is the third Wildcat in program history (Brookelynn Entz & Marisa Weichel) to score five or more goals in a season and is tied for third in program history for goals scored in a season.
• Against Colorado State on Sept. 15, Goins achieved her first career multi-goal game and set new career-highs with two goals and five points in the 3-0 win.
• Her two goals came in a span of two minutes and 26 seconds to set the school record for fastest consecutive goals by one player.
• During a two-game swing through Texas, Goins scored both of K-State’s goals. Against UTRGV, she tallied her first goal of the season and the first game-winning goal of her career with a 51st minute strike that bounced off the crossbar and into the net.
• At UTSA, Goins scored her second of the season and moved into the team lead for goals scored this season.
• This is the second time in her career in which she has scored a goal in consecutive games, also doing so at Kansas on Sept. 30, 2021 and against West Virginia on Oct. 7, 2021.
• Goins added her third goal of the season and first home goal of 2022 with a marker against Purdue on September 4.
• In her K-State career, Goins ranks second in school history for career goals (10) and is tied for first in program history for career goals per game (0.24). She also is tied for second in school history for career points (22) and is tied for second for career points per game (0.52).
• In the 2021 season, the product of Broken Arrow, Oklahoma, led the Wildcats in goals (3) and points (6) in Big 12-only matches. She scored three of K-State’s six goals in league action. Goins is the second player in program history to register five or more points in Big 12 play.
• Goins scored the game-tying goal against ninth-ranked West Virginia on October 7 with a rocket shot from 20 yards into the upper right corner in the 18th minute. This was just the third game-tying goal in program history and the first in the six-year history of Buser Family Park.

Wildcats in the NFL – Week 1

Macaleab Rich down to 4 schools with commitment nearing