In a season that has involved more than a handful of missed opportunities for the Kansas State football team, this one will sting the longest.

Searching for their first win over a ranked team since 2014, K-State let a nine-point lead in the fourth quarter slip away Saturday afternoon in a 43-37 loss to No. 18 Oklahoma State.

“We were inconsistent in the latter half of the ball game,” K-State coach Bill Snyder said. “We didn’t do all the things we needed to do. Oklahoma State had something to do with that, and the rest is on our shoulders.”

The Wildcats (5-4, 3-3 Big 12) did a lot of the little things they needed to in order to win. They established a dominant running game. They forced three Cowboy turnovers. They controlled the clock.

But the little things they didn’t do, aided by the decision to punt on 4th and inches at midfield in the fourth quarter, gave OSU just enough of an opportunity to steal a win.

OSU quarterback Mason Rudolph passed for 457 yards and five touchdowns, including an 82-yard strike to James Washington with 7:45 left to get the Cowboys within 37-35. OSU went ahead for good on a 17-yard run by Chris Carson with 1:46 left.

K-State drove down the field in the final two minutes, getting inside the OSU 10 yard line. But an offensive pass interference penalty led to a game-sealing interception in the endzone as time expired.

“I thought Jesse played well,” Snyder said. “He has some family issues that probably could have become a distraction. But he managed the game well.”

The Wildcat defense struggled in the first half, but appeared to turn a corner in the third quarter, forcing two punts and an interception in OSU’s first three drives of the second half. The interception was returned 29 yards for a touchdown by Duke Shelley.

After Shelley left the game with an injury, Rudolph picked apart the K-State secondary.

Alex Barnes and Charles Jones combined for 142 yards rushing on just 15 carries for K-State, who rushed for 345 yards as a team.

The Wildcats are off next week before taking on Baylor in Waco on Nov. 19. 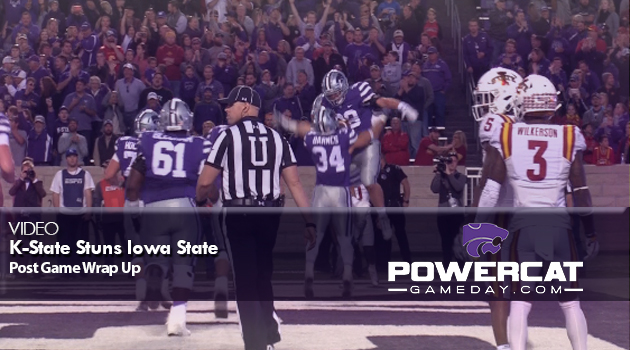