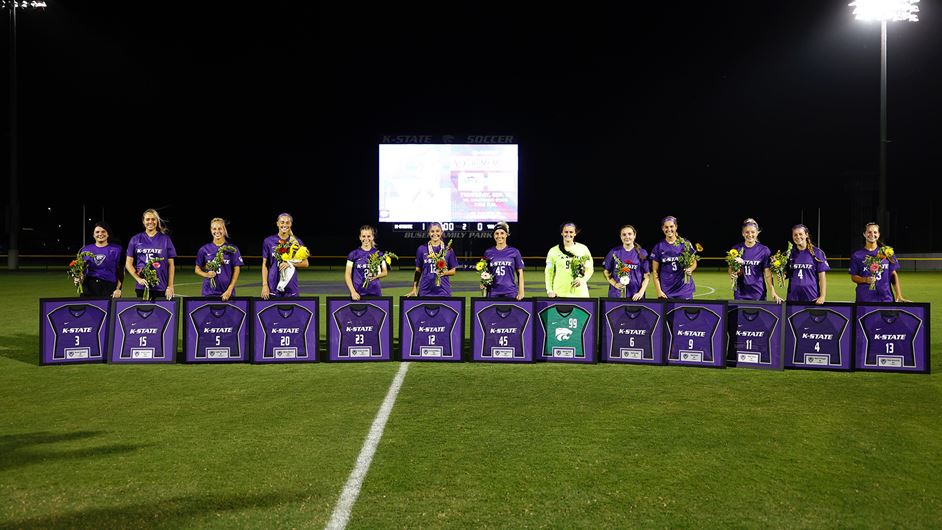 MANHATTAN, Kansas (Kansas State Athletics) – Playing in front of a season-high 1,299 fans at Buser Family Park on Friday night, K-State soccer honored its 13-member senior class, but it was a freshman that provided the decisive goal in the Wildcats’ 1-0 win over Yale at Buser Family Park. K-State, winners of three of their last five matches, improved to 3-3-1 on the season, while Yale falls to 3-1-1.

HOW IT HAPPENED
– K-State maintain a majority of possession in the first half and freshman Andra Mohler broke through for the Wildcats in the 38th minute.
– Mohler gathered possession from just inside midfield in K-State’s attacking half and carried the ball into the 18-yard box. She skipped her shot off the turf from 17 yards and under the arms of Yale goalkeeper Maya Bellomo for her first career goal.
– Prior to Mohler’s goal, Yale had conceded just one goal on the season.
– Mohler is the second freshman to register a goal this season, joining Sophie Harlan’s season-opening tally against Northwestern.
– Junior goalkeeper Alaina Werremeyer did the rest, keeping the Bulldogs off the scoreboard with four saves, all coming in the second half.
– This was the third shutout of the season for Werremeyer, tying her career season-high from the 2021 season.
– In a postmatch ceremony, Kansas State recognized the career of the 13-member senior class that includes: Kenzie Applegate, Rebecca Bartosh, Shannon Dukes, Aliyah El-Naggar, Kyler Goins, Rachel Harris, Jesse Loren, Bailey Nemechek, Caylee Thornhill, Shae Turner, Kursten von Klahr, Marisa Weichel and Roo Yarnell-Williams. The 2022 senior class has registered 22 goals and 11 assists during their time in the Little Apple.

QUICK FACTS
– K-State faced an Ivy League opponent for the first time in its seven-year history.
– Friday was the first meeting between K-State and Yale on the pitch.
– Kansas State is now 14-26-5 all-time in the month of September.
– Friday’s match was the 50th all-time match at Buser Family Park. The Wildcats are 16-30-4 in home matches. In matches played in the Sunflower State, K-State is 18-31-5.
– K-State ended a seven-match home winless streak (0-4-3). Prior to Friday night, the Wildcats’ last home win came on September 19, 2021, against UTRGV.
– When leading at halftime, K-State improved to 16-6-0 all-time.
– With its goal on Sunday, K-State has scored a goal in the first seven matches of a season for the first time in program history. K-State also set the school record for any stretch of consecutive games with a goal with seven straight games.
– Mohler is the first K-State freshman to register a game-winning goal since Adah Anderson registered the winner against North Alabama on Aug. 29, 2021.
– Werremeyer is third in program history for career shutouts with eight and remains in second on the K-State career wins list with her eighth.
– K-State ended the night with a 21-9 lead in total shots, including a 6-4 edge in shots on goal. The Wildcats are now 3-1-1 this season when recording more shots than its opponent and 20-14-3 all-time when achieving the lead in shots.

FROM THE HEAD COACH
K-State Head Coach Mike Dibbini
On the team’s performance…
“It’s always great to win at home, especially when we haven’t won at home for a while. It felt good to get that one behind us and continue to get better and move forward.”

On the goal by Andra Mohler…
“It was great. I’m glad we found separation. I was hoping I could get even more separation because you can’t keep a team like that in it when its only 1-0 and they start becoming desperate. We got kind of in a defensive mode, but we took care of business and we got the result.”

On the defense in the second half…
“The second half was a good defensive performance. The first half obviously, we had created a lot of offensive chances. We could’ve helped ourselves if we could have had a couple more goals to get some breathing room, but overall we got the shut out and got what we needed.”

On the seniors in the program…
“It’s amazing that they have been here from the beginning, and they’ve gone through the tough times and the good times. They bring a lot to the table and their experience is really important. They are leaving a strong legacy here and I am excited for their future.”

FROM THE FIELD
Freshman Forward Andra Mohler
On her first goal of the season…
“As soon as I cut inside, I knew I had space. I just knew I was going to shoot, and I knew I was going to aim for the far post. I guess I hit it hard enough and it just was able to skip through the goalkeeper’s hands and went in.”

On having a win at home on senior night…
“It felt really good. We really, really wanted to win tonight for our seniors since it was senior night, so I am just happy I was able to be part of that win.”

On the team’s positioning during her shot…
“Well before the game we knew we were going to be 3 on 3 in the offensive, so we were told to just go at the defenders when we got the ball 1 v. 1. So I think part of it was ‘right place right time,’ but also just doing what our coaches told us to do in the scouting report as well.”

Junior Goalkeeper Alaina Werremeyer
On her saves this game…
“It was a hard game. Yale really wanted it at the end, and got a lot of shots off, but I think the defense in front of me did really well keeping them out.”

On if she felt relieved after Andra Mohler’s goal…
“For sure, but it’s part of the job. It always feels better, and helps us get in the groove as a team to have a goal up. It’s just part of the game and you have to be ready to play with or without it.”

On the feeling during the last few shots by Yale…
“It’s tense, but that’s part of the game too. We expected it and my defense honestly blocked a lot more shots than I saw so we went in that defensive position so we knew we were going to be on defense more than we were going to try and keep the ball up the field so we were prepared for it.”

UP NEXT
K-State concludes its three-match home stand on Thursday, September 15, as the Wildcats host Colorado State at 7 p.m. For tickets, visit kstatesports.com/tickets or call 800-221-CATS.