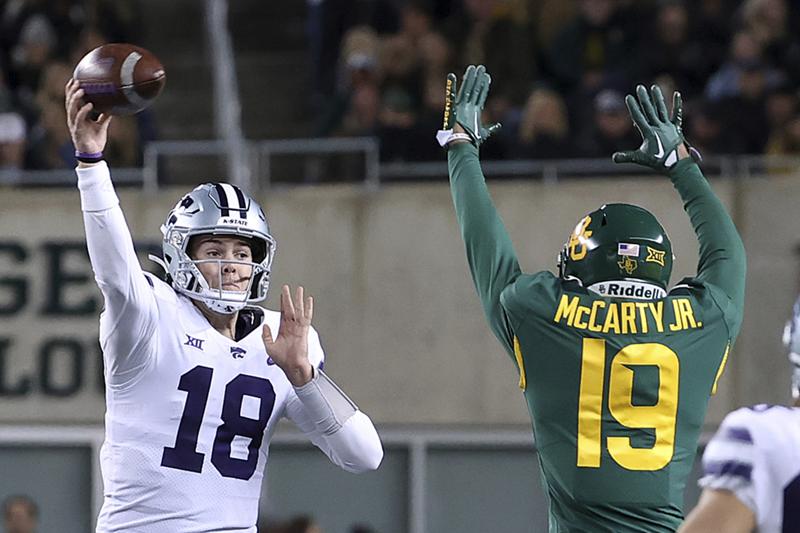 MORGANTOWN, W.Va. (AP) — Being a backup quarterback can be a lonely job, except for this season in the Big 12. The QB turnstiles have been active, and Kansas State’s Will Howard and West Virginia’s Garrett Greene are among those who have thrived.

It’s only going to get busier for Howard, who will start in place of the injured Adrian Martinez when Kansas State plays at West Virginia on Saturday as the 19th-ranked Wildcats try to close in on a possible berth in the Big 12 championship game.

Howard, a junior, will make his 12th career start and second of the season. Knowing early in the week that he would get the first-team reps in practice has been “a little more calming in a way,” Howard said.

This is the closest that he will play to his hometown of Downingtown, about 280 miles (451 kilometers) from Morgantown in eastern Pennsylvania.

“I’ll have a lot of people there,” Howard said. “As far as the Big 12 goes, there’s not a lot of games we get to play out east. So I’m excited for it and definitely have been thinking about this one.”

Howard has thrown nine touchdown passes with one interception in three games. On Saturday, he threw for 196 yards and three scores in a surprisingly easy 31-3 win at Baylor.

“He looks to be one of the more improved players this year in our league. He’s extremely efficient,” West Virginia coach Neal Brown said.

Greene got his most extensive work of the season after replacing starter JT Daniels for the second half of West Virginia’s 23-20 win over Oklahoma last week. The sophomore ran for two scores and threw for a third.

Brown said he won’t announce his starter this week, but “Garrett earned the opportunity to play more.”

The Wildcats (7-3, 5-2 Big 12, No. 15 CFP) can clinch a berth in the Big 12 title game Saturday with a win and a Texas loss at Kansas. Or the Wildcats can get it done themselves with two wins to end the regular season.

DEUCE ON THE MOVE

Kansas State’s Deuce Vaughn has 1,081 rushing yards and will go up against a defense that allowed 211 to Oklahoma’s Eric Gray last week. Vaughn has five rushing TDs and is tied for the team high in receptions with 38.

Kansas State has allowed 19 touchdowns all season. Only six Bowl Subdivision teams have allowed fewer. The Wildcats have 13 interceptions, compared to three for the Mountaineers.

West Virginia (4-6, 2-5) needs to win both of its remaining games to become bowl eligible. There’s also the job security of Brown, who is 21-24 in his fourth year. Fans have been howling all season for changes. One of them happened Monday when West Virginia announced that athletic director Shane Lyons was let go.

West Virginia kicker Casey Legg is 13 of 13 on field-goal attempts this season, including two to win games. He made a 25-yarder as time ran out last week.

“I hit it, and then blacked out for a second or two and then a bunch of teammates were surrounding me,” said Legg, a junior who played soccer at a high school that didn’t offer football. “So that was the cool part. I think the part that’s different about hitting a walk-off is as soon as you hit it, you’re getting swamped by people. So that was really fun.”