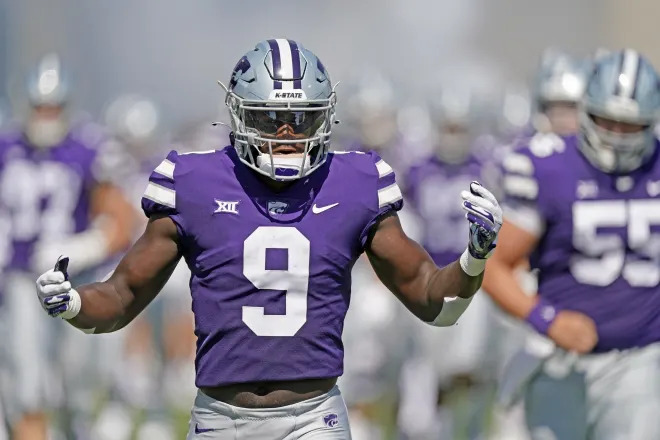 Pro Football Focus has been grading college football teams and players since 2014 and depending on the number can either be cheered or maligned. For Kansas State’s Cincere Mason, the most recent number is a good one for him.

It is easy to see why Mason might grade out the highest of any defensive back in coverage to start the 2022 season. He has come away with an interception in both games against South Dakota and Missouri. On his most recent against Missouri, he broke down how he was able to get his second pick of the season.

“I was in the post, quarterback was looking me off to the left so I was going over there to get in on another play, he came back and went to the other guy. Julius Brents was actually there too…by the time I turned around I got it, I’m glad Ju didn’t.”

Mason isn’t the only Wildcat to force takeaways, he was the fourth of four consecutive drives that ended in Missouri interceptions. Kobe Savage, Daniel Green and Nick Allen also had picks against the Tigers.

Another big element of the early success for Mason, and his other teammates on defense, is the credit to wanting to carry on the legacy of the K-State defense, while also trying to create their own. Mason said some former players like Reggie Stubblefield, Jahron McPherson and Ross Elder still reach out to talk to them before games.

Mason’s 90.6 coverage grade is just a tick higher than Georgia safety Christopher Smith, who is projected to be a late first-round pick in the 2023 NFL Draft.