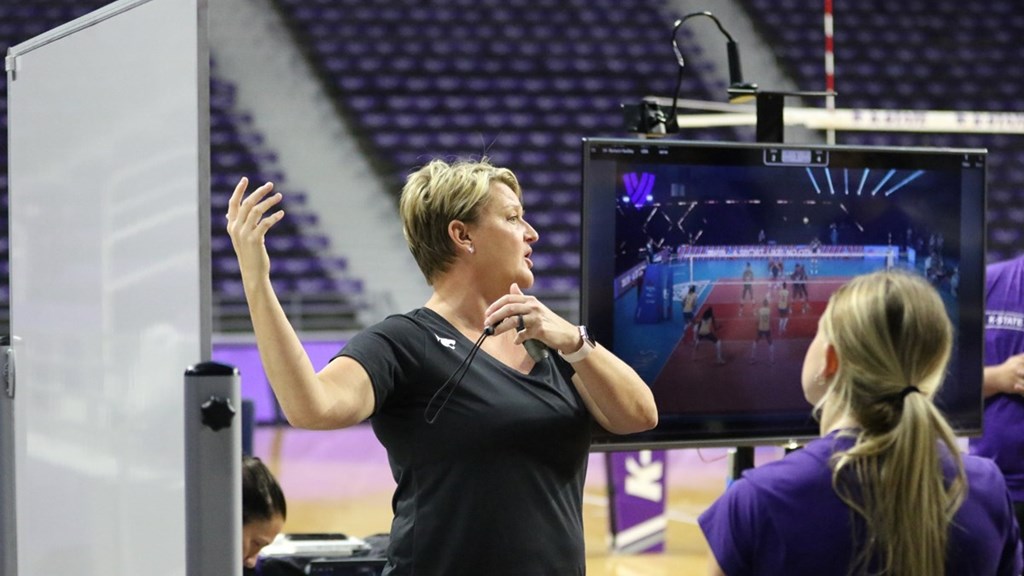 MANHATTAN, Kan. (Kansas State Athletics) – A week away from the official start of the 2022 volleyball season, K-State looks to tune up as it is set to host Wayne State (Nebraska) in an exhibition match Friday at Bramlage Coliseum with a 6 p.m. first serve.

Additionally, head coach Suzie Fritz met with members of the local media Thursday to preview the upcoming season. A transcript can be viewed at the end of this release.

The match will mark the team’s only preseason contest as the Wildcats embark on the program’s 49th season. The winningest and longest tenured head coach in program history, Fritz enters her 22nd year at the helm after leading the Cats to their 18th all-time postseason berth in 2021.

Seven letterwinners return for 2022, headlined by two-time All-Big 12 First Team selection Aliyah Carter. Carter, a junior outside hitter, has been a unanimous first-team pick in each of her first two seasons and was voted unanimously to this year’s preseason all-conference squad.

K-State and Division II Wayne State have faced off just once, as the sides met during the altered 2020-21 season. K-State came away with a straight-set victory on March 28, 2021, at Bramlage Coliseum.

Tickets are just $5 when purchased in advanced at K-StateSports.com/Tickets, by calling (800)-221-CATS or stopping by the K-State Athletics Ticket Office at Bramlage Coliseum. Season-tickets are also on sale.

The Wildcats officially open the 2022 season on Friday, August 26 at the K-State Invitational with a doubleheader against Sam Houston (12 p.m.) and NC State (7:30 p.m.). The Wildcats will conclude the two-day tournament Saturday against Florida A&M at 12:30 p.m.

SUZIE FRITZ, K-STATE HEAD COACH
On how practices are going into the new season after an NCAA Tournament appearance…
“It feels totally different, I think. Six new players from last December. Certainly, we were thrilled to be in the NCAA Tournament, but actually a little frustrated once we got there that we didn’t really play to our capabilities. I think that’s a little motivation from that point forward, that’s when the 2022 season started. That disappointment, you want to use that as a fire to get to that next step where we want to be. We had a great spring, which matters a lot, and more importantly, we had a good summer. Most of them came back in the summer. We added a couple in the spring that have been with us now for a little bit, which will pay dividends down the road this season. In the summer, Coach (Danny) Cavender does such a great job just physically getting them prepared – not just physically but mentally ready for the work that they’re about ready to do. It’s a really good mix, in my mind, of veteran players and energetic personnel, that the culture feels really good right now. For this early, they’re playing really well together. Those have been the big takeaways for me.”

On meshing younger players with more veteran players…
“I think sometimes that can be a complicated process. It’s very different to be at an early stage in your career, at 18 years old, and at a later stage in your career, maybe 22 years old. They’re at very different places just in their lives, so getting all that to come together can be complicated at times. Some of it is that our upperclassmen, our veterans have done a phenomenal job at taking the younger players under their wing and teaching them what it means to be a Wildcat.”

On Haley Warner entering her second and final year at K-State…
“I feel a sense of composure with her. She’s much further along (this year), she knows who she is, she knows how she needs to play, she knows what she needs to do. She seems more comfortable. There’s a good composure and comfort to her. She’s kind of the caretaker, she brings us all in and takes care of everybody. That’s her role. Some of it is just that she’s a veteran and she’s been through some things and has learned both the easy way and hard way. She’s really a culture builder, that has helped us a lot.”

On setters Ava LeGrand and Loren Hinkle…
“Ava has had a tremendous amount of success as a prep player. She’s Nebraska’s Gatorade Player of the Year, she’s a club All-American, she wins. Her high school program wins, her club program wins, she wins. She’s an incredibly high-execution and highly competitive human being, and I think that will allow her to go through some of the ebbs and flows that, I think, she’s going to naturally have. There are some things you can’t teach in a short amount of time – feel, situational awareness – some of those things will just have to grow over time. The same about Loren Hinkle. Loren is a high IQ person and also a really good learner, highly intelligent and highly driven. She is always going to do the right thing. Both of them have all intangible qualities to be great at the position, what they lack is experience. The only way to we know how that will come out is to put them out there and see how they do. Our confidence in them is really high. I am excited for them to gain the type of experience they need to be elite, and I think they can be elite.”

On what she hopes to get out of Friday’s exhibition…
“We played an intrasquad scrimmage the other day, and I thought that was really good. We felt the emotions and what you feel when it’s more live. We had opportunities for success and opportunities for failure. Some handled it well and some didn’t handle it well, just those learning moments, in terms of preparation, there’s no better teacher than experience. I think that’s where we are at, we are ready to put them out in the jerseys, under the lights, feel all the things that come with a live match. You can’t duplicate that in practice, and I think we are ready to do that and hit against someone else on the other side.”