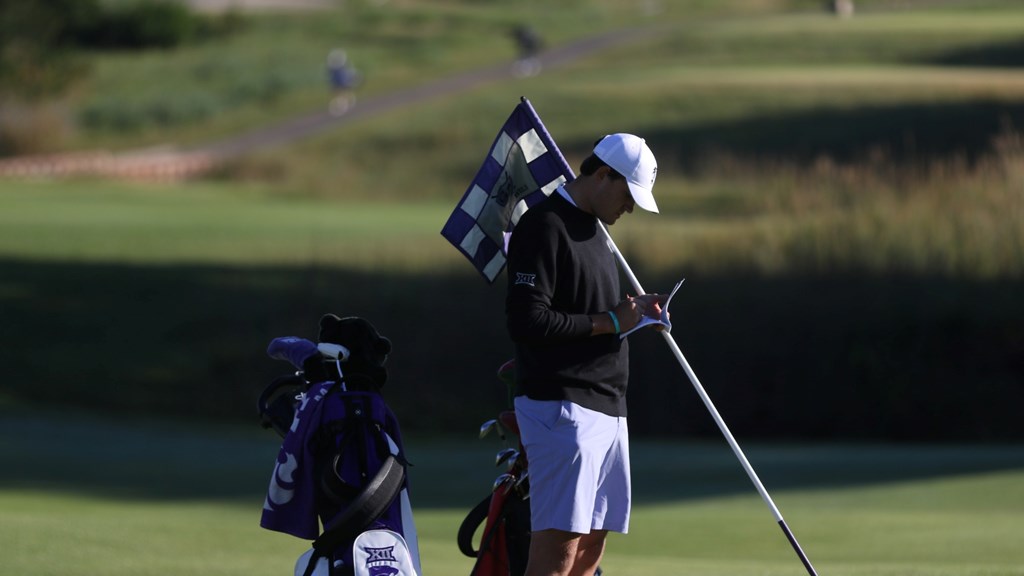 MANHATTAN, Kan. (Kansas State Athletics) –  A total of 21 strokes separate the Kansas State men’s golf team and the rest of the field as the Cats opened the 2022 Wildcat Invitational with a dominant performance on Monday to put them well atop the team leaderboard after two rounds at 25-under par 551.

The conditions were beautiful at the par-72, 7,5245-yard Colbert Hills Golf Club, and the Wildcats felt right at home from the get go as four purple golfers found themselves in the top five.

Every member of the scoring lineup is in the top-15 and all eight competing Wildcats are in the top-20.

K-State shot an 8-under par 280 in the first round, which looked modest compared to its 17-under par 271 second round that tied for the fourth-best round in school history. This is the second-straight season the Wildcats carded a top-five round.

The Wildcats are set to have a historic 54-hole performance if they can continue the low scoring in the final round on Tuesday.

“We got off a little bit of a slow start this morning, and then the guys found their groove on the back nine, and I think they just carried that momentum over,” said head coach Grant Robbins. “Then in the second round, we just got off to a hot start and kept going. It helped that the wind died down in the afternoon. The greens were soft, so the conditions were perfect for scoring and guys took advantage of it.”

Leading K-State and the entire 81-man leaderboard is Will Hopkins.

The senior used a tournament-best 12 birdies to build a narrow one-stroke advantage at 8-under par 136 behind a 5-under par 67 opening round and a 3-under par 69 second round. Hopkins will be vying for his first ever individual title in the final round.

It doesn’t take long to find another Wildcat on the leaderboard as sophomore Cooper Schultz is one stroke off the lead in second place at 7-under par 136. Schultz shot a 4-under par 68 in the first round and a 3-under par 69 in the second 18. If he’s able to pull off the win, it would also be his first individual victory while a top-five finish would be the highest placement of his career.

Nicklaus Mason had a sensational day competing as an individual. He’s just behind Hopkins and Schultz in third place after firing 1-under par 71 first round and a 4-under par 67 second round. Mason will jockey for position with his teammates as yet another Wildcat will be searching for his first-career individual title.

Grayson Blunt, a senior transfer, shined in his K-State debut and is in fourth place at 4-under par 140. Blunt shot a 2-over par 74 in the first round but then moved up 24 spots after a career-low round of 6-under par 66 in the afternoon.

Tied for 12th place is both Luke O’Neill and Laurenz Schiergen at 1-under par 143. O’Neill got off to a slow start with a 4-over par 76 opening 18, but he responded with an impressive 5-under par 67 second round to leap up 30 spots. Schiergen was consistent throughout the day with a 1-under par 71 first round and an even-par 72 second round.

The other two individuals competing for K-State were Tim Tillmanns and Ben Stoller who both had solid days. At even-par 144, Tillmanns is tied for 18th place. He began the day with a 2-over par 74 first round before carding a 2-under par 70 second round.

Stoller, a freshman who’s making his collegiate debut, is in 20th place at 1-over par 145. He shot a 3-over par 74 in the first round, but in keeping with the theme of strong second rounds, Stoller fired a 1-under par 71 to close out the day.

Though Robbins is excited about the performance, he knows there is more to achieve tomorrow.

“We’re basically competing with each other,” said Robbins. “The guy’s all want to win. I think that’s the message now is we’ve just got to keep pushing. We had a good round today, and I was really proud of them. It wasn’t perfect. We made some mistakes, but the thing they did today was they really did a good job bouncing back. We’d make a bogey and follow it up with a couple birdies.

“We’ve got to keep that same mindset and just be confident, be disciplined and be aggressive in spots and just keep playing our game and see what happens,” said Robbins.

Play at the Wildcat Invitational will conclude Tuesday with the final round of action beginning via a shotgun start at 8:30 a.m.

Fans are welcome to come out to Colbert Hills and watch the Cats try to close out their first team title since winning the Husker Invitational in the spring of 2021.