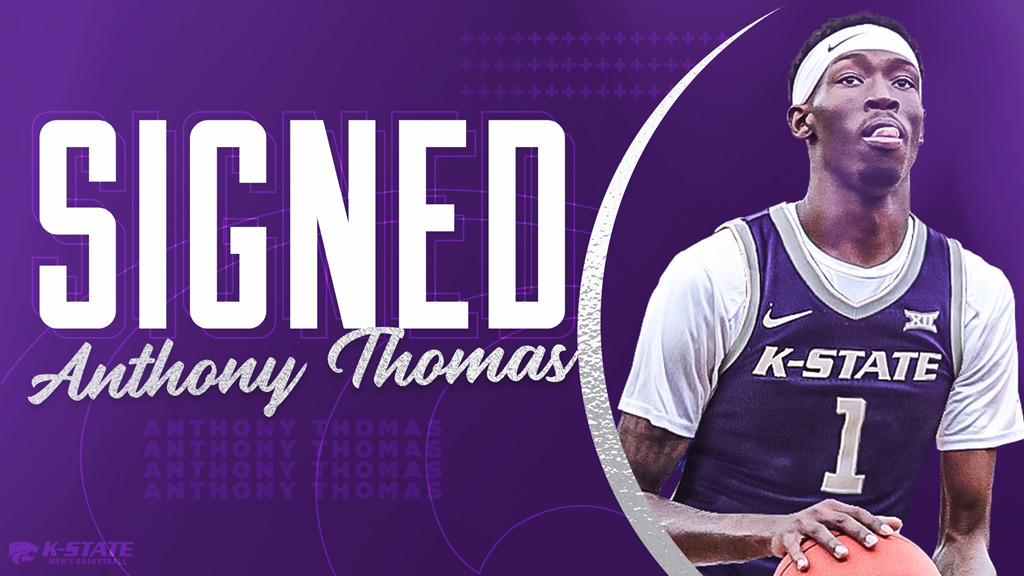 A 6-foot-7, 180-pound combo guard, Thomas arrives at K-State after playing the 2021-22 season at Tallahassee Community College in Tallahassee, Fla., where he averaged 11 points and 4.6 rebounds per game in helping the Eagles win 21 games in one of the nation’s top junior college leagues – the Panhandle Conference. He played in 22 games with four starts as a freshman at UT-Martin in 2020-21, averaging 9.0 points and 2.8 rebounds per game.

“Anthony is another great addition to our team, and we are excited to welcome him and his family to K-State,” said Tang. “We’re really pleased to add a player of his caliber this late in the recruiting season. We like both his size and skill set and think he will grow into a productive player once he gets around our elite staff. We can’t wait to get him to campus and in front of Wildcat Nation!”

Thomas will have three years of eligibility remaining after the NCAA granted Fall 2020 and Winter 2021 sport student-athletes an additional year due to the COVID-19 pandemic.

Thomas enjoyed a productive 2021-22 season at Tallahassee Community College, which boasted seven Division I signees. He ranked second on the Eagles in scoring (11.0 ppg.), while he was third in field goals (96) and 3-point field goals (27) as well as rebounding (4.6 rpg.). He scored in double figures in 15 games, which included eight games of 15 or more points and three 20-point outings. He twice scored a season-high 25 points, including against conference foe Pensacola State on Feb. 16 on 6-of-11 field goals and 11-of-14 free throws.

Thomas began his college career in 2020-21 at UT-Martin, where he saw action in 22 of 24 games with four starts as a true freshman during an unprecedented season for the Skyhawks. In addition to navigating the pandemic conditions, Thomas and his teammates tragically lost their head coach Anthony Stewart right before the season on Nov. 15, 2020.

Despite the adversity, Thomas flourished as a true freshman, emerging as the team’s top freshman in 2020-21, ranking second in 3-point field goals (23) and fourth in scoring (9.0 ppg.), while connecting on 75.8 percent (25-of-33) from the free throw line. He became the first Skyhawk true freshman to start a season opener since 2013-14, playing 25 minutes against Evansville on Dec. 2, 2020. He went on to score in double figures on seven different occasions, going for 15 or more points on six of those occasions, including a pair of 20-point outings.

Thomas played his senior season at Olympus Prep Academy in Williamstown, N.J., where he earned NJHoops.com third team all-state honors for the independent/prep class in 2020. He played in over 40 games and events while playing the Great Atlantic Conference.

Thomas was rated as a three-star prospect out of Olympus Prep by 247Sports, ranking among the top-50 players at his position for the Class of 2020. He was recognized as one of the seven national standouts from the Hoop Group Fall High School Showcase in October 2019.

Thomas is the 10th player to sign with the Wildcats since Tang was introduced as the program’s head coach on March 21, including the second community college transfer following Tomlin. The addition gives K-State a full complement of 13 scholarship players.

Players of the Game: Deuce Vaughn makes another splash