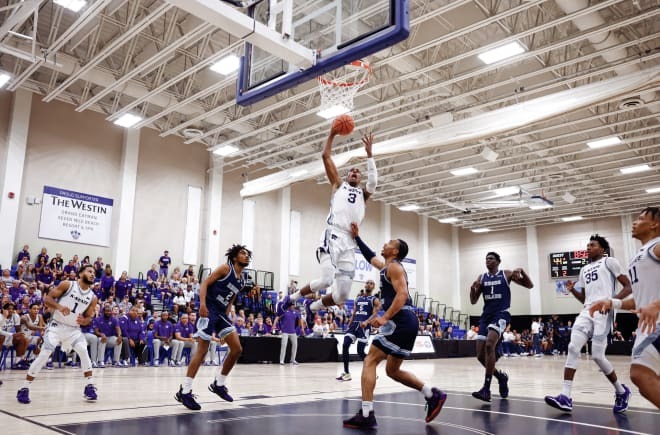 K-State raced out to another big lead in their fourth game of the season and first at the Cayman Islands Classic. Doing so off the backs of their triumvirate of Keyontae Johnson, Markquis Nowell and Nae’Qwan Tomlin.

While Johnson made plays early and has been the clear number one all season, Tomlin filled the stat sheet in the first half and made more athletic plays. After 20 minutes Tomlin had 13 points, 5 rebounds and 3 blocks giving K-State a 44-27 lead at the halftime break.

The most eye-catching play came just six minutes into the game, as he drove to the hoop and easily finished with one hand on the Rhode Island defense.

One of his blocks in the first half led to a runout that ended up in Nowell’s hands, who gave it right back for Tomlin’s tricky finish for a bucket and the foul.

Nowell also loaded the stat sheet in the first half, pouring in 9 points and 7 assists, while snagging five rebounds as well. As a team, the Wildcats held Rhode Island to 31% shooting from the floor and 13% from three.

Then the second half came, something that has plagued the Wildcats all season.

And the good news was the Wildcats didn’t let the foot off the gas. There was a slow stretch and some sloppy play, but the Wildcats got things shifted into high gear again.

The key stretch for K-State included a Tykei Greene three from Nowell and then Desi Sills on the break finishing with a slam. The Wildcats reclaimed their energy and pushed the lead back up to a larger number.

Tomlin led all scorers with 15, while Johnson had 14. They were joined in double figures with 12 from David N’Guessan.

K-State was strong defensively again, holding Rhode Island to 33% shooting and 17% from three, but two things gave reason for improvement. Turnovers and fouls, are a few things that they will look to tighten up in the final two games of the Cayman Islands Classic. Next up for the Cats, they will face Nevada in the semifinals tomorrow at 6:30 PM on FloHoops.

Analysis: Will a bigger College Football Playoff be better?