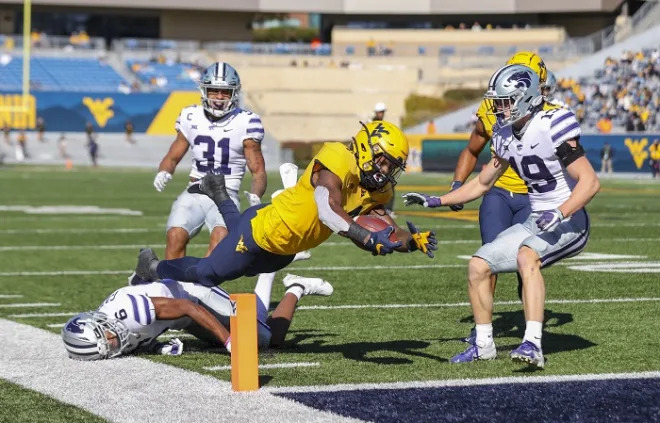 Kansas State is looking to maintain strong control of second place in the Big 12 on Saturday with a win over West Virginia In Morgantown, W.Va., after moving into sole possession after beating Baylor 31-3 last week.

Wildcat quarterback Will Howard is getting his second start of the season on Saturday with starting quarterback Adrian Martinez set to miss the game because of an injury he sustained on the second offensive possession the Wildcats had against Baylor. In relief, Howard threw three touchdown passes, including two to tight end Ben Sinnott.

Saturday’s game is going to be the fourth that Howard plays in this season, which means that if he plays in one more contest his redshirt would be voided. Prior to the season, and through the first part of the year, Kansas State’s head coach Chris Klieman said that he wanted to redshirt Howard, but now the Wildcats — and Howard — have decided that not redshirting Howard is a possibility.

“We’ve had that discussion and dialog over the last month since Adrian has been hurt between he and I and then he and coach Klein and I had another conversation with him today and with where we’re at and with how he’s playing I know he’s comfortable, I know we’re comfortable in the fact of this is a pretty special time for K-State football and he’s playing at a really high level that he’s excited about his opportunity,” Klieman said.

In his three previous games this season, Howard has completed 63 percent of his passes for 717 yards and nine touchdowns with just one interception. His best game of the season was his lone start, vs. Oklahoma State, when he had 296 yards and four touchdowns.

“The offense is like the back of my hand now because I’ve been in the system for so long,” Howard said. “When I was a young kid and going through those struggles, you don’t see it in the moment, those things kind of helped prepare me for what I’m going through now. It’s kind of cool to see things come full circle a little bit. There’s still so much work to do.”

Mountaineer head coach Neal Brown could be on the hot seat at the conclusion of this season, especially if his team fails to reach a bowl game. West Virginia and athletic director Shane Lyons agreed to part ways on Nov. 14, which only adds to the uncertainty regarding Brown’s future with the Mountaineers.

“I think they were going to be ready to play no matter what because of the character and toughness of Neal Brown coached teams, but yeah, they’ve got a lot to play for and we have a lot to play for so it’s going to be the same thing,” Klieman said. “Who can make fewer mistakes and play a clean game.”

– Coming off a dominant 31-3 win at Baylor, K-State will head back out on the road as the Wildcats face West Virginia on Saturday afternoon in Morgantown, W.Va. The game will kick at 1 p.m. CT and be shown on Big 12 Now on ESPN+. K-State enters the week in second place in the Big 12 standings, while West Virginia is fresh off a 23-20 home win over Oklahoma to keep its bowl hopes alive.

– K-State is 7-3 this season with all three losses coming against teams that have been ranked in No. 4 TCU, No. 21 Tulane and Texas (18th last week). The Cats are bowl eligible for the third time under Chris Klieman and will advance to their 24th bowl appearance in school history, including the 11th in the last 13 seasons. Klieman is the first coach in school history to send three of his first four squads to the postseason.

– Last time out, K-State used a dominant defensive performance and standout play on offense from Will Howard, Deuce Vaughn and Ben Sinnott to defeat Baylor, 31-3, in Waco. Howard came off the sideline to throw for 196 yards and three touchdowns, Vaughn had 106 rushing yards to reach 1,000 rushing yards for the season, and Sinnott caught seven passes, two of which were touchdowns.

– The Cats have been solid on defense, allowing just 17.5 points per game and 361.1 total yards per game. This week, the Cats rank fifth nationally in turnover margin, seventh in fourth down defense, 11th in interceptions, 12th in scoring defense and 17th in pass efficiency defense. The Cats have kept each of their Big 12 opponents this year under their season scoring average entering its game against K-State while also holding three conference opponents without a touchdown.

OPPONENT TO WATCH ON OFFENSE

QB JT Daniels is a former five-star prospect, but he’s had an odd career. After experiencing good success at USC as a freshman in 2018 he lost his job, partly because of injury. Then, he transferred to Georgia prior to the 2020 season but again lost his job because of injury in both 2020 and 2021. Now at West Virginia, in his final year of eligibility, Daniels has completed just 61.2 percent of his passes for 2,107 yards and 13 touchdowns and nine interceptions. In each of the last two weeks, Daniels has been replaced in the fourth quarter by the Mountaineers’ backup quarterback.

QB Garrett Greene has played in seven games this season, including the last two games for West Virginia. Greene has dynamic legs and has run for 212 yards on 27 attempts, which is just under 8.0 yards per carry. As a passer, though, Greene is still developing. He’s completed less than 55 percent of his 37 passes this season and has only 241 yards with two touchdowns.

RB Tony Mathis has rushed for 545 yards this season for West Virginia and has two games this season where he has topped 100 yards this season. Mathis had 23 carries for just 53 yards against Oklahoma last week, but he was potent against Baylor with 163 yards and a pair of touchdowns.

WR Sam James has also topped 600 rushing yards this season for the West Virginia offense. Last week against Oklahoma, he had three catches for 90 yards. James hasn’t topped 100 yards in a game this season, but he has recorded at least 50 yards in seven games this season.

WR Kaden Prather is West Virginia’s third-leading wide receiver this season at 487 yards on the year. He averages over 9.5 yards per reception this year. Prather’s best game this season came against Baylor when he had 109 yards on eight receptions.

OPPONENTS TO WATCH ON DEFENSE

DL Dante Stills is playing the best football of his career as a fifth-year defensive tackle. Stills has improved on his ability to make routine plays this season, which has made him far more impressive in the eyes of NFL evaluators. Despite playing defensive tackle, Stills leads the Mountaineers in tackles for loss this season at 9.0.

DL Jordan Jefferson is in his fourth year at West Virginia in 2022 and he’s likely having the best year of his career. Jefferson has 7.0 tackles for loss as the Mountaineers’ second defensive tackle and two sacks.

LB Lee Kpogba transferred to West Virginia prior to this season after playing the last two seasons at Syracuse. Kpogba has been West Virginia’s best linebacker for much of the season with 66 total tackles and two sacks. He also has a fumble recovery this season.

S Aubrey Burks has been the Mountaineers’ best defensive back this season, but the secondary for West Virginia is where a lot of the issues have come this season. Burks has a pick this season and a forced fumble to go along with his 37 tackles.

WILDCAT IN THE SPOTLIGHT ON OFFENSE