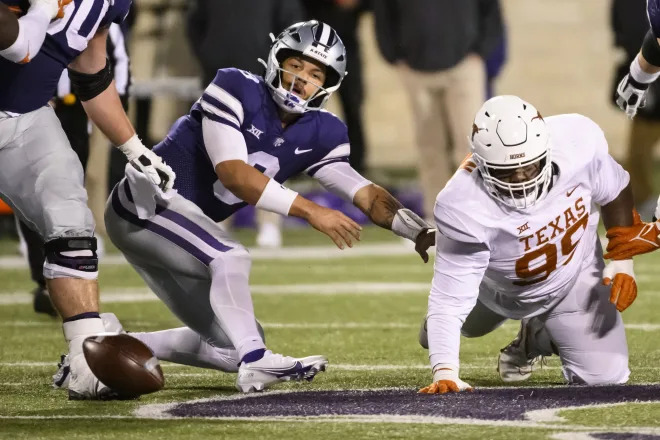 There’s a label on Adrian Martinez – a label that says he is often the reason his team has lost a football game. Fair or unfair, the words are scribbled to him, it’s his reputation. Yet, for all but one week of the 2022 season, Martinez has flipped the pencil upside down and used the pink eraser to scratch away at the words he’s been tabbed with.

For the first time in 2022, Martinez fell back to the quarterback that many in the country viewed as damaged goods, left to the curb to be discarded for the garbage man to scoop up and take away.

Martinez, though, refuses to let that label stick. He knows it’s there, kind of like how you know about the fly that buzzes around in your kitchen in the summer even though you can’t always see it. It’s there. And when the fly comes back into your vision, you look to swat it away. That’s what Martinez is looking to do to the words that have been written about him.

There are two key plays in K-State’s 34-27 loss to No. 18 Texas on Saturday that stick in his head. The first came shortly before halftime. The Wildcats trailed 24-10, but with a score before halftime they’d go into the locker room with momentum against a team that has proven to have a propensity to punt away leads like a fourth grader kicks the red ball on the playground at recess.

Instead of cutting into the 14-point Longhorn lead, though, Kansas State’s transfer quarterback with the turnover-prone label stuck to him threw a costly interception to a Texas linebacker – Martinez’s first interception of the season. Texas’ offense returned to the field and quarterback Quinn Ewers later dropped his second touchdown pass into the soft hands of Xavier Worthy to put Texas ahead 31-10 going into halftime.

“I kind of wrote him off in my progression there,” Martinez said. “Figured he would go with our through route that we had there by the No. 3 receiver. And he didn’t. That’s kind of situational, realizing that we are in the two-minute drill at the end of the half and they are expecting pass. I forced it, trying to do too much.”

If being truthful, though, Martinez will tell you throwing his first interception of the season is a bit of relief. “It was a matter of time,” he said of having his first turnover of the season. “Now that it’s out of the way, sure, it wasn’t on my mind before, but it sure won’t be now.”

The second costly play from Martinez, really, is two-fold. The Wildcat defense held strong for the entirety of the second half against the Bijan Robinson-led Longhorn offense, allowing just a field goal. The K-State offense clawed back possession-by-possession until the score was 34-27.

After a Kobe Savage blitz to stuff Robinson behind the line of scrimmage on third down forced a Texas punt, K-State’s offense was presented with an opportunity to tie the game with a touchdown or take the lead with a touchdown and successful two-point conversion. They never had the chance to take the lead.

On a second and 10 play from near midfield, Martinez was forced from the pocket. He ran out towards his left, but before he fully escaped the pressure, a Texas defensive lineman’s right arm swung at the football and knocked it free. The ball bounced toward the Texas sideline, but before Texas could scoop up the loose ball it went out of bounds. Disaster avoided…until two plays later. After directing a receiver over the midfield and completing a first-down pass to temporarily stop the game clock. On the ensuing play, Martinez was trapped in a collapsing pocket. Again, a Texas defensive lineman swiped at the ball. This time as it bounced away it found the open arms of another Texas player. Game over.

“I really think on that specific play, trying to get the ball out of my hand a little bit sooner, and keeping two hands on the ball when in the pocket and moving in the pocket,” Martinez said. “There was a few times we were fortunate to not lose the ball.”

Two plays, though, don’t define a football game. And Martinez actually had a pretty good game for the Cats in his return from a knee injury that basically kept him out of two straight contests. In those two games, backup quarterback Will Howard had seven total touchdowns and more than 500 total passing yards, which created a bit of a stir about who K-State would start at quarterback vs. Texas.

The preparation paid off for Martinez. He completed 24-of-36 passes and had a season-high 329 passing yards with a couple of touchdown passes. He also ran 14 times for 52 yards, which helped the Cats’ offense stay ahead of the chains and avoid pass-rushing Longhorns.

“I thought he made some really good throws,” head coach Chris Klieman said. “Especially off-schedule or with people right in his lap. To hand in there, he took some shots.

“What was great was that on Sunday, in his conversation with Coach [Collin] Klein, he felt great. He was sore because he hadn’t played in a month. But he felt really good, so we didn’t see anything that will slow him down from continuing to feel better and better.”

The label on Martinez is still printed – and the two turnovers vs. Texas stuck the fraying parts of the sticker back down. But largely, Martinez has used the pink eraser in his bag to lift the stereotype about his abilities as a quarterback. It’s been about growth and focusing on how to eradicate the turnovers that plagued him in his past.

“I feel like I’ve come a long way as a player this year,” he said.

He’s right. Martinez has. But he needs to continue to grow for K-State to remain in Big 12 title contention this season.