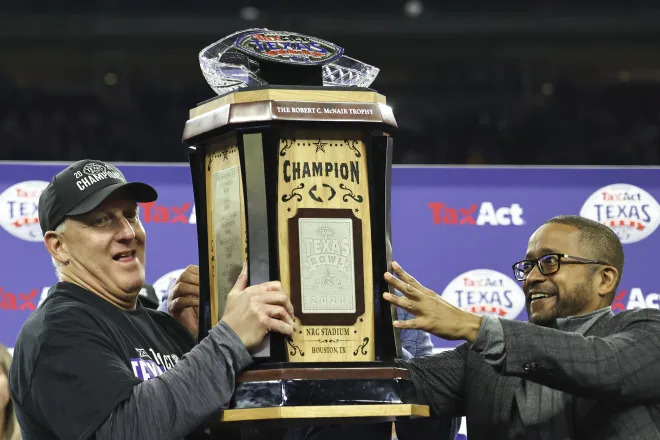 Kansas State head coach Chris Klieman shot down rumors on Tuesday of his name being connected to the vacant Nebraska coaching position after the Cornhuskers fired Scott Frost on Sunday following a 45-42 loss to Georgia Southern.

“I really like it here at Kansas State,” Klieman said. “I love our players and I love our guys. It’s pretty simple for me, and I’ll just say one name: (athletic director) Gene Taylor. Gene is my guy.”

ESPN’s Pete Thamel and The Athletic’s Bruce Feldmann included Klieman in their list of candidates to replace Frost in Lincoln.

Klieman has been the head coach at Kansas State since 2019 and led the Wildcats to winning seasons in three of his four campaigns in Manhattan, including a Texas Bowl victory over LSU to conclude last season. Klieman owns an overall record of 24-16 in his time at Kansas State.

Klieman has already earned one contract extension, which runs through the 2026 season, and he makes a salary of $3.5 million dollars. Klieman’s salary increases to $4 million in 2023 and to $4.3 million for the final three seasons of his current contract.

Klieman’s buyout is currently set at $4 million should another school hire him to serve as their head coach.

Klieman expressed feelings for Frost calling him a “friend” on Tuesday and saying that he “hates to see it because that is part of the profession.”

Frost had a 16-31 record in his four-plus seasons leading the Cornhuskers, only better than Big Ten basement dweller Rutgers in the conference over the course of his tenure.

“We owed it to the players to give them a different voice, perhaps a slightly different vision,” Nebraska athletic director Trev Alberts said of the decision to fire Frost after two weeks. “Give them some confidence, an opportunity. I know how disruptive these changes are, but we needed to inject something into this team to give them the confidence and hopefully help them compete. Nothing would please me more than to see a pretty significant chance and help this team get over the hump and win some games.”

Associate head coach Mickey Joseph is serving as the interim head coach for Nebraska for the rest of this season. The Cornhuskers host No. 6 Oklahoma on Saturday in Lincoln.

2 Minute Drill: Wildcats have more good than bad against WVU