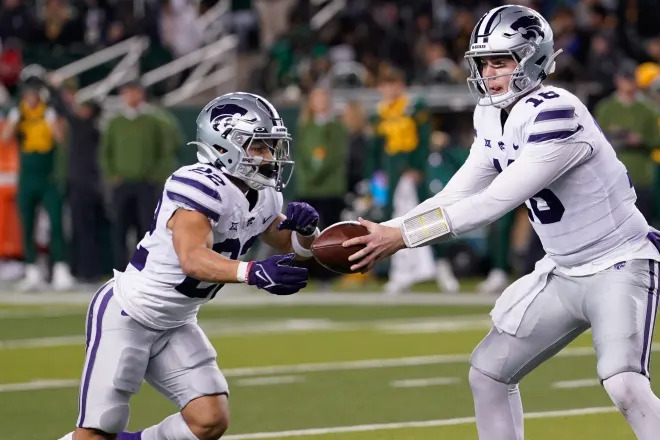 Kansas State plays at West Virginia (4-6, 2-5 Big 12) on Saturday. The Mountaineers just beat Oklahoma last week, and three of their wins this season have come on their home turf.

“I feel like they have guys who can really run on the outside,” starting linebacker Daniel Green said about the challenges West Virginia presents. “They have some receivers that can go up and get the ball in space. They have some backs that can run, really like to get downhill and they’re really physical up front. They have a good offensive unit. As a defense, we have to take on this challenge. We’re ready to embrace this challenge.”

“Not thinking about that,” quarterback Will Howard said of K-State’s current standing. “We’re just thinking about West Virginia. I’ve definitely wanted to play these guys back in Morgantown. I remember the game we had in 2020. It wasn’t ideal for me, for us. And there’s a lot of tough things going on at the time. I’m excited to get after these guys. I feel like that is who we are — we are a process driven, one day at a time, one play at a time kind of team. That’s how we’ve found success before, and we know that’s how we’re going to have to operate moving forward to be successful.”

The updated #CFBPlayoff top 25 has arrived

Agree with the rankings?

K-State handcuffed in loss to Raiders