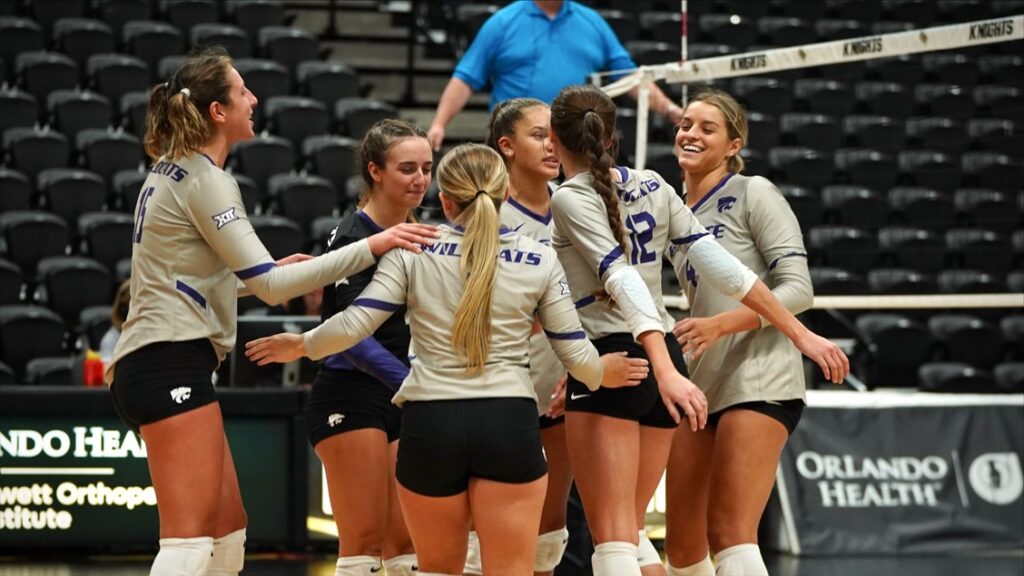 Carter hit .366 in producing her 12th career 20-kill performance, as she now sits alone in second place in K-State history for 20-kill matches during the rally-scoring era. Additionally, the 20 kills pushed her over the 800-kill mark with 801.

The Wildcats (4-0) served up 11 aces in pushing their winning streak to four matches. Carter’s four aces equaled her career high while Sydney Bolding added three and Elena Baka chipped in a pair.

Baka joined Carter in double-figure kills with 17 at a .297 pace, adding six digs and four blocks. Loren Hinkle handed out 44 assists along with eight digs and Mackenzie Morris led all players with 17 digs.

Victoriia Lokhmanchuk (22) and Polina Shemanova (17) accounted for 39 of Syracuse’s (2-2) 57 kills. Lokhmanchuk hit .383 and finished with three blocks and three digs.

HOW IT HAPPENED
Set One
K-State tallied the first four points of the match, including back-to-back aces by Baka, as it never trailed in set one. The Cats’ extended their lead to 13-7 following a 6-1 run that featured kills from both Baka and Carter.

The Orange used a four-point run of their own to even the score at 21. Three kills from Baka helped propel the Wildcats to a 4-2 closing run. Baka and Carter each put down five kills in the set, helping the Cats hit .344.

Set Two
An early four-point scoring run behind the serve of Bolding helped K-State claim a 5-3 lead. A stretch of six straight points on the Molly Ramsey’s serve saw the Cats’ lead swell to 11-4.

Syracuse was forced into 10 attacking errors while it gathered only nine kills for a -.028 hitting percentage. The Wildcat defense totaled four blocks, with two block assists from both Bolding and Kadye Fernholz.

Set Three
Syracuse jumped out to a 5-1 lead only to see K-State respond by scoring 10 of the next 15 points to claim a 11-10 edge. From there, the teams traded points in a frame that saw 11 tie scores and four lead changes. The last lead-change came when the Orange earned the set win behind three consecutive points.

Carter led K-State with six kills while Baka added five in the third. Lokhmanchuk led SU with six. Syracuse hit .318 to the Cats’ .256.

Set Four
Aces from Bolding, Carter and Morris kickstarted K-State’s set-opening 12-4 run. From there, the Wildcats led the rest of the way and racked up five aces in pushing their winning streak to four matches.

On the match overall…
“It was a little bit of a left-side battle. They have two very capable left-side hitters that we knew, from a defensive perspective, could be challenging. I thought we did a decent job against them, for the most part. If you look at distribution for them, that’s about 60 percent of their swings going (to them). We knew that was going to be an important factor in the match, so I think we did a decent job there. Obviously, we could’ve done a little bit better job containing (Victoriia Lokhmanchuk), but in contrast to that, I thought our lefts were very good. So it did become a bit of a left-side battle.”

On her team’s left-side hitters…
“Aliyah was doing tremendous things for us – five kills a game – which is a tremendous performance for her. She and Elena are carrying a significant load for us right now. They’re playing six rotations, we are asking them to do a lot, asking them to touch it a lot. When it came right down to it, I thought they did a tremendous job on the left. I thought (setter) Loren Hinkle was really good locating left side, as well. I think the difference was were just a little bit better there.”

On K-State’s serving effort…
“We were 95 percent in and very low error and pretty disruptive. We won the serving and receiving battle and we knew they were going to be a big, physical team and needed to be able to do some things with our serving. I thought we were pretty strategic and efficient with it.”

UP NEXT
K-State continues the UCF Challenge Friday against North Florida, with first serve set for 3:30 p.m. CT. The match can be seen on FloVolleyball and fans can listen to Rob Voelker on the call online at K-StateSports.com/watch.

Cincere Mason graded by PFF as best DB in coverage