VIDEO: John Kurtz, Cole Manbeck, and Corey Dean break down the big days for Kansas State from Skylar Thompson, Deuce Vaughn, Khalid Duke, and Jahron McPherson. Plus a look ahead to Texas Tech next week, and a little talk about Chiefs v Ravens for Monday Night Football.

NORMAN, Okla. (AP) — A Kansas State squad that lost its opener to Arkansas State two weeks ago, had its roster depleted by COVID-19, and entered Saturday’s game against No. 3 Oklahoma as a four-touchdown underdog overcame it all to pull off one of the biggest stunners of the season.

Skylar Thompson passed for 334 yards and ran for three touchdowns, and the Wildcats rallied from 21 points down to beat the third-ranked Sooners 38-35, a 50-yard field goal by Blake Lynch with 4:32 remaining providing the margin of victory.

Kansas State coach Chris Klieman said he didn’t know until Friday if he’d have enough players available at all position groups to play the game. Turns out, the Wildcats had exactly what they needed.

“You find out a lot about a person and about a team from a challenge and adversity, and this team responded,” Thompson said. “I had no doubt going into this game that we were going to have a chance to win just by the way that we handled the last two weeks, the way we practiced, the way we came together and corrected our mistakes.”

Freshman Deuce Vaughn caught four passes for 129 yards and ran for a touchdown for the Wildcats. It was Kansas State’s first-ever road win against a top-three team in the AP poll.

Kansas State upset Oklahoma 48-41 in Manhattan, Kansas, last year, making the loss especially disappointing for the Sooners. Oklahoma outgained the Wildcats 517 yards to 400 but had four turnovers to none for Kansas State.

“We just made critical errors that gave them a chance,” Oklahoma coach Lincoln Riley said. “Give Chris (Klieman) and Kansas State a lot of credit. When we made errors, he made us pay.”

In the opening moments of the second quarter, Rattler threw into traffic and found Drake Stoops for a 32-yard touchdown. It was the first career score for the son of former Oklahoma coach Bob Stoops, and it gave the Sooners a 14-0 lead.

Thompson’s 39-yard touchdown pass to Chabastin Taylor in the second quarter cut Oklahoma’s lead to 14-7, but the Sooners answered with Marvin Mims’ 9-yard touchdown reception in the final minute of the first half.

Rattler’s 53-yard pass to Stoops led to Seth McGowan’s 5-yard touchdown run and gave the Sooners a 35-14 lead late in the third quarter.

Two short rushing touchdowns by Thompson got the Wildcats back in the game.

Kansas State’s Nick Allen blocked Reeves Mundschau’s punt, and the Wildcats took over at the Oklahoma 38. Vaughn’s 38-yard touchdown run on the Wildcats’ second offensive play and the critical extra point tied it at 35 with 8:17 to play.

Kansas State’s Jahron McPherson intercepted Rattler in the final minute to help close out the win.

Oklahoma had a regular-season loss each of the four times it has reached the College Football Playoff. The Sooners hope they can bounce back again.

“We’re very disappointed, but the resolve is very strong,” Riley said. “We know how to respond to a loss around here, and we’ll do it, and it’s going to take every single one of us.” 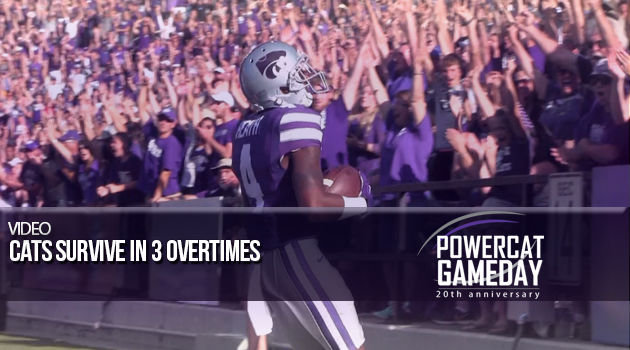