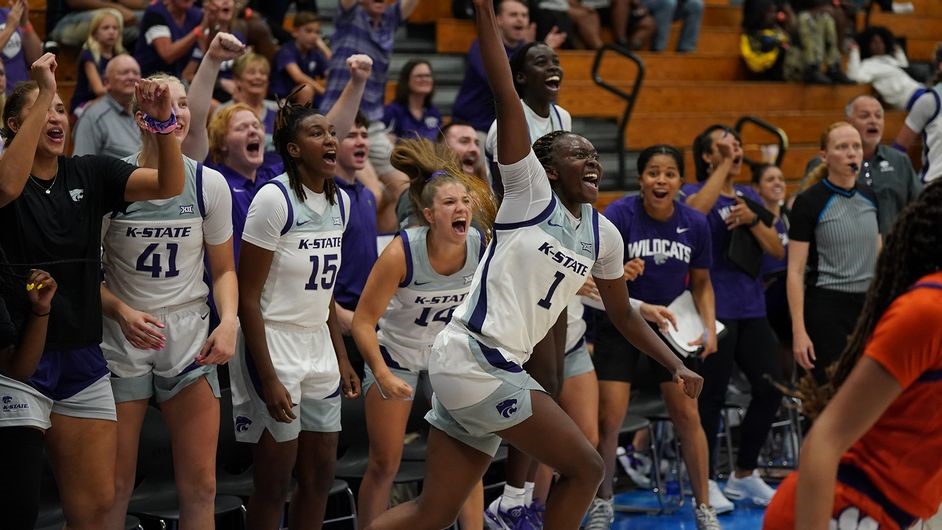 K-State (6-0) has won six straight games to begin a season for the first time since the 2016-17 season, when the Wildcats started the season with nine straight wins. This is the third time in the Jeff Mittie era in which the Wildcats have started a season with six consecutive wins (2014-15 and 2016-17).

HOW IT HAPPENED
– K-State held a 32-29 lead at halftime, following a first half that featured four ties and three lead changes. The Wildcats used an 11-3 run to permanently wrestle the lead away from Clemson (3-2) in the second quarter.
– After the Tigers answered a layup from Jaelyn Glenn to begin the third quarter with a jump shot with 9:19 remaining, K-State would go on a game-deciding 23-0 run from the nine-minute mark until 52 seconds to play in the third frame.
– The run started with a Gregory three-pointer with 8:54 to play in the third. Jaelyn Glenn followed with a pair of three-pointers, one on each side of a Clemson timeout.
– Sophomore Serena Sundell converted a three-point play with 5:48 to play to increase the K-State lead to 46-31.
– Two Brylee Glenn layups, one on each side of another Clemson timeout with 4:17 to play, pushed the Wildcat advantage to 22 points, 53-31.
– Ebert capped the quarter with two free throws and a three-pointer before the end of the quarter to send the Wildcats to a 30-4 third quarter total and a 62-33 lead at the end of the stanza.
– In the second half, K-State locked Clemson down defensively, holding the Tigers to 2-of-18 (.111) shooting and just nine total points in the half. The nine points in the second half were the fewest allowed in a half this season and the fewest since allowing six first half points to Oklahoma State on Feb. 20, 2022.

QUICK FACTS
– This is K-State’s third appearance in the Paradise Jam (2001 and 2016). The Wildcats own a 6-1 record in games played in the Paradise Jam, including a current five-game winning streak which dates to the final game of the 2001 event.
– The Wildcats own a 120-63 all-time record in regular season tournaments, including a 10-6 record in the Jeff Mittie era.
– K-State leads the series with Clemson, 3-1.
– The Wildcats are 8-11 all-time against current members of the ACC.

TEAM NOTES
– Thursday’s starting five was Jaelyn Glenn, Serena Sundell, Brylee Glenn, Gabby Gregory and Taylor Lauterbach. This was the second time this group started a game together this season.
– K-State has opened the season with six straight games of 70 or more points for the first time in program history.
– For the game, K-State shot 43.5 percent (27-of-62) from the field. The Wildcats have made 24 or more field goals in all six games this season.
– K-State was 12-of-28 (.429) from 3-point range. This was the fourth time this season the Wildcats made 10 or more 3-point field goals in a game. The four games with 10 or more 3-point field goals made equals the total from the 2021-22 season.
– With the 30 points scored in the third quarter on Thursday, the Wildcats have scored 30 or more points in a quarter three times this season.

FROM THE HEAD COACH
K-State Head Coach Jeff Mittie
On the third quarter run and what the halftime talk involved…
“We felt like we were too extended defensively and so we were getting too many fouls. They were splitting us with the dribble. We obviously rebounded the ball really well in that stretch of the third quarter. They were pretty much one and done. The other emphasis was in breaking any kind of pressure. We wanted to do it with the pass, not the dribble and we spent too much time with the dribble in that stretch where we weren’t very good. So I just think we found a better rhythm in terms of moving the ball with the pass. And you know, our players are playing together really well. They need to trust that they’ll help each other and I think they’re starting to get better at that.”

On everyone involved in the third quarter scoring…
“There was a couple times I didn’t feel like they were playing with the open player very well. I didn’t feel like they were locked into one another. I’ll use the Kansas City Chiefs in our area as an example. The way they spread it around to their wide receivers. It’s fun to watch and I would say the same thing with us. While Gabby (Gregory) had the hot hand. Jay (Jaelyn Glenn) had a hot hand. I thought Brylee (Glenn) made good reads all night. Serena, I thought really found the open player. Serena said to me at one timeout, “We don’t need to call any plays” because I had a couple to call. She threw the lob to Eliza. We’ve seen stretches of this team this season, where when they get locked in and they get to going, they play very well together.”

On the defensive performance in the second half…
“We haven’t played a lot of zone this year. We did feel like coming into this that we needed to do two things better. When we were in man to man, we need to guard the ball better. When we’re in zone we need to keep people off the free throw line. Now we did not keep them off the free throw line very successful tonight. But I did feel like when the zone was tighter and not too extended, I felt like our length played a factor in missing some shots.”

On prepping for three games in three days…
“We referenced it last week when we were going through it that this was good preparation for the Virgin Islands and we even referenced playing late and so you hope any of those things as a player you put in the bank. You realize what you did to get your body ready the next day. You realize how you got your rest, how you hydrate all those things are important mentally. Keep things simple. We’ll get some rest tonight and really address those things in the morning. We’ll get to work. This is the fun, why you do these tournaments. It’s a fun thing in the  preparation. You get a lot of coffee and you go to work and tell the players get a bunch of rest and I think our group had that opportunity last week to practice what we hope they use it wisely.”

UP NEXT
K-State continues action in the Reef Division of the Paradise Jam on Friday afternoon, as the Wildcats face Northern Arizona at 4:45 p.m. (CT). Friday’s game will air on ESPN3 and can be heard on the K-State Sports Network.